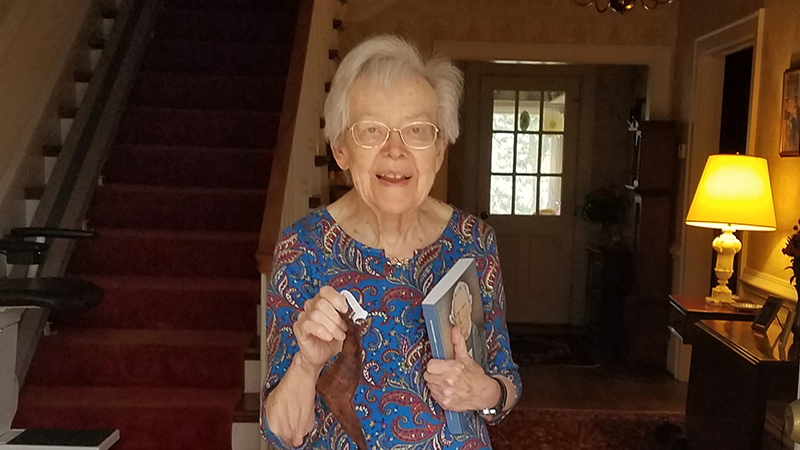 Doris Gwaltney, a descendant of Dr. John R. Purdie, with a copy of “Dr. Purdie’s Papers,” a book published by the Isle of WIght County Museum Foundation that includes a collection of Purdie’s journals and correspondence from 19th century Isle of Wight County. Gwaltney, who inherited Purdie’s papers in 1983, wrote the book’s foreword.

A lifelong resident of the area, Gwaltney grew up on a peanut farm about six miles south of the town’s borders, having only left briefly to earn a music degree from Longwood University, then Longwood College. She then returned to her hometown and taught music at the elementary school level for four years, but began pursuing her literary aspirations seriously in the early 1970s.

After winning the writing contest at Christopher Newport University’s annual writer’s conference two years in a row, she began coordinating the event in 1987. She became a charter member of the Isle of Wight Writer’s Group — an informal gathering of budding local writers — in 1988 and published her first historical fiction novel, “Shakespeare’s Sister,” in 1995.

The novel, which takes place in Elizabethan England, is based on the premise that William Shakespeare had a sister who had secretly written plays under her brother’s byline. Gwaltney then followed with “Duncan Browdie, Gent.,” a novel set in colonial Smithfield about an indentured servant, in 2002.

She’s also the author of several poems and short stories, two collections of historical monologues, and five one-act plays based on preserved courthouse records, which Smithfield’s 1750 Courthouse Committee uses to re-enact actual colonial-era trials on the second Saturday in October.

“I’ve known her all my life,” said Mary Cole, coordinator of the Sundays at Four music program at Christ Episcopal Church in Smithfield.

Cole recalls how Gwaltney once helped her mother, Katherine Edwards, write a memoir on her 19 years running “Miss Kitty’s Kindergarten” on her family farm.

Gwaltney was also a strong supporter of Cole’s Sundays at Four program.

“She called me two weeks ago and expressed she had missed the concert on Nov. 28 and was sorry to have done so,” Cole said. “That’s the last I actually talked to her.”

Cole will remember Gwaltney as “a fantastic lady” who “knew everybody” in town.

Dru Stowe met Gwaltney about 20 years ago at Trinity United Methodist Church, where she and her husband sang in the choir. He ended up getting recruited to act in her historic plays at the 1750 Courthouse.

“She was just always a class act every time you were around her, very inspiring,” Stowe said.

W. Michael Farmer, a fellow member of the Isle of Wight Writer’s Group, said he first met Gwaltney around 2005 when she and fellow member Judy Bloodgood Bander encouraged him to attend one of their critique sessions after self-publishing his first novel.

“I much admired her work, and over the years, we swapped books back and forth,” Farmer said. “Surprisingly, she seemed to enjoy the Western historical fiction that I did.”

He recalls an instance when he’d scheduled an event at the Smithfield Blackwater Regional Library branch, where Gwaltney and one other person were the only two who attended.

“I could always count on her,” Farmer said.

She was also a “moving force” with the CNU Writer’s Conference, having once recruited him to participate in the event. Her decades-long association with the institution culminated with her teaching writing for CNU’s Lifelong Learning Society.

“I feel like I really owe her a great debt of gratitude for helping me get my writing career off the ground,” Farmer said.

“It was obvious she was a kind-hearted and lovely lady,” England said. “She was devoted to education, history and writing. And to her dear husband Atwill.”

“When she pronounced the draft ‘just perfectly wonderful,’ we all knew that we had prepared a fine publication worthy of her approval,” England said, describing Gwaltney as having “the persona of being the grandmother everyone wanted.”

“All of Smithfield and Isle of Wight County will miss her,” England said.