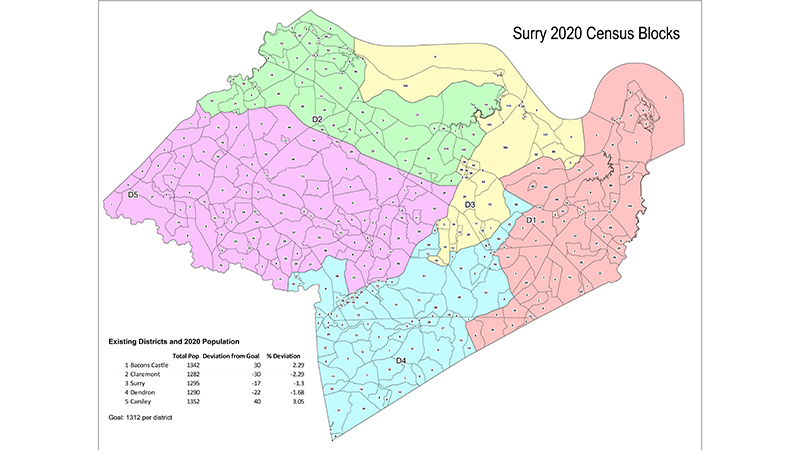 Surry County’s Board of Supervisors voted 4-0 on Jan. 6 to make no changes to its voting districts based on 2020 census data, after putting the matter to a public hearing.

Surry’s Board of Supervisors adopted the current five-district map in 2003 after a lawsuit successfully challenged the county’s 2001 redistricting. The board then re-adopted the 2003 district boundaries in 2011 following the 2010 census. Per state law, localities must revise their voting districts using the latest census data every 10 years.

According to that data, Surry’s population dropped 7% from just over 7,058 residents in 2010 to 6,561 as of 2020, resulting in an ideal population of 1,312 for each of Surry’s five districts. Per federal and state constitutional requirements, redrawn districts must be more or less equal in population, be contiguous and compact, and not discriminate based on race. Deviations between districts should be less than 5% if possible, but deviations of up to 10% may withstand challenges.

Only one speaker — Diane Cheek — spoke during the public hearing. She asked about growth trends within the five districts.

Keeping Surry’s current voting district boundaries will result in a total deviation of 5.34%, according to a breakdown of Surry’s 2020 census data by voting district compiled by the Crater Planning District Commission. The Bacon’s Castle District, which spans the upper half of the county’s border with Isle of Wight, would be Surry’s most populous, with 1,342 residents. The Claremont District, which spans from the town of Claremont down the north side of Route 10 to the edge of the town of Surry’s incorporated borders, would be the county’s least populous, with 1,282 residents.

Per the federal Voting Rights Act, there must also be at least one minority-majority district based on the ratio of white residents to people of color, and whether voters consistently vote to defeat minority candidates. According to the 2020 census data, Surry’s Black population dropped from 46% in 2010 to just over 41% in 2020, while its white population rose from 51% to just over 53%. Another 4.4% identify as multiracial, 0.2% identify as Asian and 1.3% identify as some other race.

Per the General Assembly’s 2021 Voting Rights Act of Virginia, the county must submit its map to the state Office of the Attorney General for a “certification of no objection” for the districts to become official, or hold a 30-day public comment period, followed by a 30-day waiting period where any resident can challenge the map as having the purpose or effect of discriminating against a racial, ethnic or language minority group.

Dendron District Supervisor Michael Drewry was absent for the vote.