Randy Pack stepped down as chairman of Smithfield’s Planning Commission Jan. 11, and announced his intention to recuse himself from any future votes on the proposed “Grange at 10Main” mixed-use development.

In his place as chairman is Charles Bryan, who served as the commission’s vice chairman for a number of years. The commissioners’ vote to name Bryan as Pack’s successor was unanimous, with members Michael Torrey and Raynard Gibbs absent.

Julia Hillegass was then voted in, also unanimously, as the commission’s new vice chairwoman.

Pack will remain on the commission as the Smithfield Town Council’s liaison, but said he chose to step down from chairing the body due to a potential conflict of interest — telling his fellow commissioners it was “quite likely” he would become involved in the hospitality aspect of the proposed development, should it be approved.

Former Smithfield Foods Chairman Joseph W. Luter III purchased and razed the 1730s-era Pierceville homestead and the former Little’s Supermarket in 2020, and presented plans in 2021 for turning the 50-plus-acre site into the proposed “Grange” development, which would include a hotel, farmers market with restaurant space, and housing.

“We may be involved in the restaurants in the development and potentially the hotel,” Pack told The Smithfield Times via email Jan. 12. “No deals have been inked yet and we are simply in the discussion phase.”

Pack and his brother, Brian, are principals of Pack Brothers Hospitality, which owns and operates two local hotel, restaurant and marina businesses: Smithfield Station and the Surry Seafood Co. The Pack brothers are also working to develop a similar establishment at Fort Monroe in Hampton, and hope to add Luter’s development to their list of local investments.

“I will not vote on anything with that project … I plan to be very transparent in my interest in the Luter property,” Randy Pack told his fellow commissioners and attendees at the Jan. 11 meeting.

Pack then confirmed to the Times that he also plans to abstain from any votes or discussions that arise at the Town Council level concerning Luter’s development.

Smithfield, to date, has only been provided with renderings of the proposed development, and has yet to receive an official application from Luter for rezoning or any permits that would need the Planning Commission’s or Town Council’s approval. 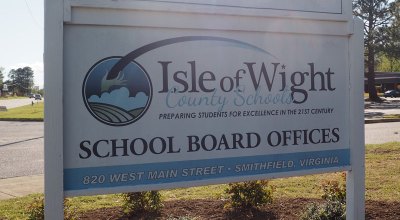