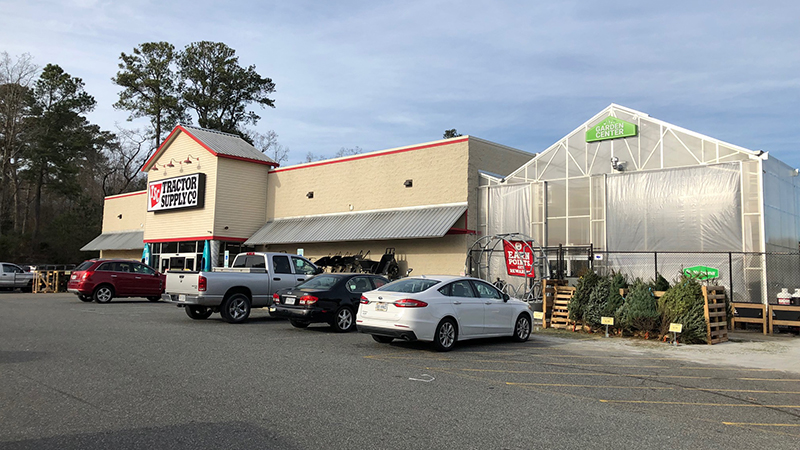 Tractor Supply has already added a greenhouse to its downtown Suffolk store, and is proposing a similar addition in Smithfield.

Smithfield’s Planning Commission sent Tractor Supply Co. back to the drawing board on Jan. 11 after reviewing the retailer’s request to add a greenhouse and drive-through to its store at the edge of town.

The company plans to locate the proposed 3,500-square-foot addition adjacent to the existing store on land currently being used as a fenced outdoor sales area. As it’s currently proposed, the greenhouse would be built from white polycarbonate panels with two roll-up curtains facing Benns Church Boulevard.

But several commissioners objected to the plans, citing the project’s location in Smithfield’s Entrance Corridor Overlay district. According to the town’s zoning ordinance, the purpose of the district is to “protect the aesthetic and visual character” of areas “adjacent to major existing and proposed highway corridors.”

“I would like to see something that’s more consistent with the facade of the building,” added Commissioner Julia Hillegass.

According to Chris Goggin, Tractor Supply’s construction project manager, the addition of greenhouses and drive-throughs is “something that we’re trying to do at all of our stores.” The drive-through would replace the store’s existing curbside pickup zone.

Onyx Creative, applying on behalf of Tractor Supply, had requested an entrance corridor overlay review from the commissioners, as well as two special use permits — one for the greenhouse and one for the drive-through.

The meeting included a public hearing on the matter, which drew one speaker who’d inquired about the proposed structure’s durability in hurricanes.

The commissioners ultimately voted to table the matter and directed Tractor Supply to return at a later date with modified plans.