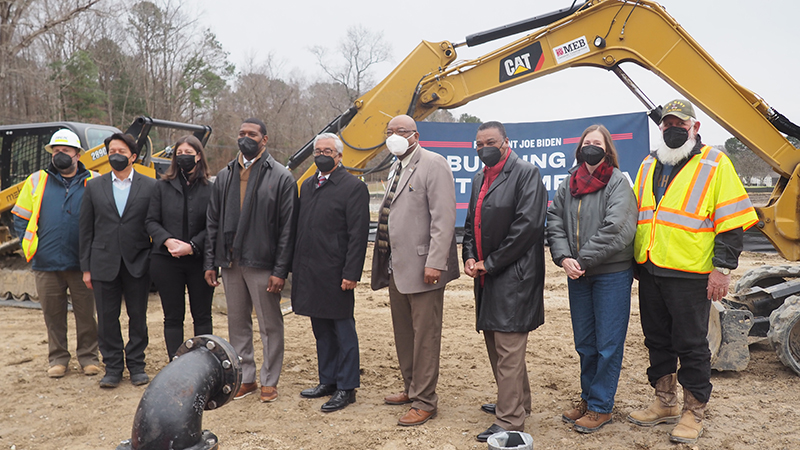 His tour included a stop at the construction site for Isle of Wight County’s replacement Hardy Elementary School, where new water and sewer mains are being installed.

U.S. President Joe Biden signed the $550 billion federal funding package, officially known as the Infrastructure Investment and Jobs Act, into law last November, after it passed the House of Representatives 221-201 and the Senate 69-30. Two House Republicans and 18 Republican senators joined with Democrats in supporting the measure.

At the Hardy site, a new pump house — designed to match the look of the new school — already stands, and the construction of a 500,000-gallon water tower is under way. Once operational, the tower and new pipelines will supply treated drinking water, purchased from the town of Smithfield, to the new school and surrounding communities, replacing well systems that for years have been plagued by high fluoride levels.

Sewer service at the new school will come via a 24-mile pipeline the Hampton Roads Sanitation District is building from Surry to Smithfield, where it will connect to existing infrastructure that will send the waste to a treatment plant in Suffolk.

According to Deputy EPA Press Secretary Tim Carroll, the HRSD project has not received any funding via the bipartisan infrastructure law, but future projects by regional entities like HRSD “could be a candidate.”

“This is really a story of regionalization … say you give grants to a small community,” said HRSD Chief Financial Officer Jay Bernas. “Sure, they can build it but can they operate it and maintain it?”

HRSD, on the other hand, serves 1.9 million Virginians spanning 20 cities and counties.

“You can incentivize regionalization by allowing a regional entity like HRSD to qualify for those grants,” Bernas said.

Regan’s tour of Virginia began in Richmond that morning, and continued to Chesapeake, “looking at lead pipes in particular,” he said.

“It’s really great to be here with the administrator today to see these two communities, both how we’re getting clean water to our homes, for our children, and also effective wastewater treatment, especially in rural areas,” Luria said.

“This is a great example of what is happening with infrastructure legislation,” Scott said.

“By joining HRSD, they’re taking some of these smaller plants offline, they’re getting rid of drain fills and septic systems, and so we are actually reaching these communities that couldn’t do this on their own,” Luria added.