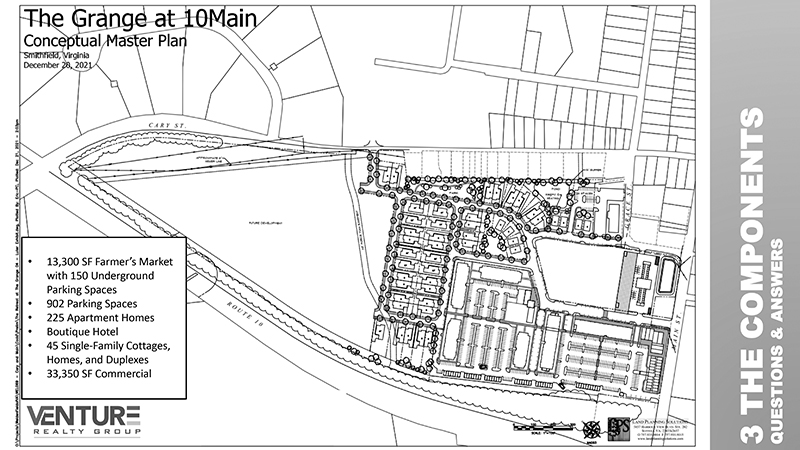 A conceptual plan of The Grange at 10Main shows the development connecting to existing roads at Main, Grace and Cary streets. File photo

Former Smithfield Foods Chairman Joseph W. Luter III anticipates, within the next 90 days, to submit a formal plan to the town of Smithfield for his proposed “Grange at 10Main” mixed-use development, according to a full-page advertisement his son, Joseph W. Luter IV, published in the May 4 edition of The Smithfield Times.

Luter IV further said it’s his father’s intention to “contribute any of his profits back to the town.”

Smithfield’s Town Council and Isle of Wight County’s Board of Supervisors received their first official look in December at the elder Luter’s preliminary plans to redevelop the former Little’s Supermarket and 1730s-era Pierceville homestead at the edge of the town’s historic district. Luter III purchased and razed buildings on both properties in 2020.

The preliminary plans the Luters presented call for a $100 million first phase of development, which would include a permanent farmers market, a hotel, three- and four-story apartment buildings, single-family and duplex homes, commercial space and more than 1,000 parking spaces.

While the Luters haven’t made a formal application to the town for rezoning or permits pertaining to the now-vacant 56.8 acres, a group of Smithfield residents has repeatedly spoken in opposition to the project at recent meetings of the town’s Planning Commission and Town Council. Some have focused on its potential to increase traffic, while others have taken issue with the financial buy-in Luter III has requested from the town and county.

Luter III has offered to donate land and contribute $1 million toward the construction of the proposed 13,300-square-foot indoor/outdoor farmers market building — if the town and county jointly raise another $2.7 million.

According to a fiscal impact study prepared by Ted Figura Consulting for LSMP LLC, Luter III’s holding company for the project, the two localities would also be expected to “purchase and operate” the new farmers market, “provide an economic incentive” for the hotel and “purchase the development’s infrastructure and utilities through a participation agreement.”

Currently, there is no mixed use zoning option in Smithfield for which the Luters can apply, though the town’s Planning Commission has been debating such an option since December.

The proposed change to the town’s zoning ordinance would replace the unused “planned corporate office and research district” zoning designation with planned mixed-use development, or PMUD. The PMUD zoning would allow single-family and multifamily homes, bed-and-breakfast lodging, retail stores and other uses to coexist on a single parcel. While the change was intended as a means of creating a more walkable South Church Street corridor in accordance with the goals of a new proposed comprehensive plan for Smithfield, members of the town’s Planning Commission have acknowledged the new zoning option — if approved — would likely become the tool the Luters use when making their “Grange” application to the town.

School Board sets criteria for next IW superintendent