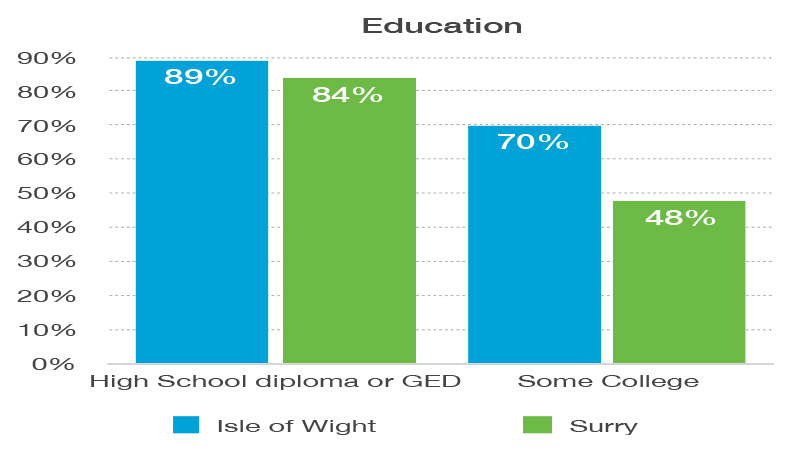 Isle of Wight County leads Western Tidewater  in health outcomes and the health factors that lead to them, according to recent city and county health rankings published by the University of Wisconsin Population Health Institute.

Neighboring Franklin ranks near the bottom of the state, while the rest of the Western Tidewater region ranks in the middle third.

Falls Church ranked first, while Petersburg ranked last of 133 localities in Virginia. Franklin ranked 128th in health outcomes and 118th in health factors, which, the study notes, represents things that can improve the length of life and its quality if they are modified.

“The results of the study make it clear that health disparities and inequities occur, not only between regions of the Commonwealth, but also within localities, even the wealthy ones,” said State Health Commissioner Dr. Colin M. Greene in a statement. “While change in health-influencing factors takes time, the Virginia Department of Health is committed to supporting its local health departments and focusing on improving the health and well-being of all people in Virginia.

“We will be taking an analytical, evidence-based look at all of these factors, and incorporating them into the next state health improvement plan, Virginia’s Plan for Well-Being, with the intent of improving measurable health outcomes that truly matter to Virginians.”

The study calls the health factors predictors of how healthy communities can be in the future. Those factor areas include health behaviors, clinical care, social and economic factors and physical environment.

The entire region had at least 30% of residents who are considered obese, and in all but Suffolk, there are lower numbers of primary care doctors per capita.

The report also highlighted the average number of poor mental health days in the last 30 days, with the region’s average ranging from four to five days, and child care cost burden, which in the region ranged from 18% of a family’s income in Isle of Wight to 23% in Suffolk and Southampton and 25% in Franklin and Surry.

The report issued Wednesday used data from 2019 and 2020, unless otherwise indicated, as the basis for its health rankings.

The percentage of adults reporting binge or heavy drinking in Isle of Wight is 19%; the state’s percentage is 17%. Thirty-four percent of residents are reported as obese, and 19% both smoke and are considered to excessively drink, according to the report. It also has a lower ratio of primary care physicians.

Nearly 70% of residents have attended at least some college, and 89% of adults 25 and up have a high school diploma or equivalent, according to data from 2016 to 2020.

Surry, like Franklin, has a higher percentage of children in single-parent households (37%), and has higher percentages of residents who are obese (38%), smoke (21%) and physically inactive (33%). Just 8% have adequate access to locations for physical activity.

Eighty-four percent of county residents are high school graduates, while 48% have attended at least some college.

Franklin had the highest percentage of people in poor or fair health at 24%, and 42% of residents reported being obese, or having a body mass index greater than 30 kilograms per square meter. It also had the second-highest rate of preventable hospital stays, defined as the rate of hospital stays for ambulatory-care sensitive conditions per 100,000 Medicare enrollees, at 4,721.

Of its residents, 27% do not live near a grocery store — defined in the study as being more than a mile away from a store in an urban area, and more than 10 miles away in a rural area — and 11% who say they lack adequate access to food. The city also has 31% of its children living in poverty and 54% who live in single-parent households.

Across Western Tidewater, at least 34% are considered obese.

Life expectancy in Franklin is nearly 10 years below the state’s 79.1 average. All other Western Tidewater localities have a life expectancy of between 77 and 79.

In Southampton, 40% are considered to be obese, 20% smoke and it has just 17% of its population who are considered to have adequate access to locations for physical activity — the report citing data from 2010 and 2021.

The county also has a lower ratio of its population who have access to primary care physicians, with one for every 4,410 residents. Some 85% of its population has completed high school or its equivalent. Sixty percent of county residents have attended at least some college.

In Suffolk, 19% were considered to be in poor or fair health, with 35% obese and 17% of adults smokers. Another 8% reported having food insecurity, with 4% having limited access to healthy foods. It said 7% of teens and young adults ages 16 to 19 are neither working nor are in school, citing data from 2016 to 2020. It did not provide data for other Western Tidewater localities.

Suffolk’s rate of hospital stays for ambulatory-care sensitive conditions per 100,000 Medicare enrollees, at 4,906, is the highest in the region and higher than the state’s, which is 3,896. But the city is considered to have an adequate supply of primary care physicians, and just 8% of residents are uninsured. Nine in 10 residents have completed high school or have a GED, and 72% have attended some college.

Suffolk, according to the rankings, had the highest traffic volume in Western Tidewater with 246 vehicles for roughly every meter (3.3 feet) of road, with Southampton the lowest, at 21 vehicles per meter of road.

The Sentara assessment noted that Franklin, Suffolk and Surry were all in the worst quartile of Virginia localities for obesity percentages, and all had high percentages of smokers except in Isle of Wight.

It stated Franklin was in the worst quartile of localities in Virginia for hospitalization rates due to mental health, suicide/self-intentional injury and alcohol/substance abuse, and preventable hospitalization rates were high in the Sentara service area except Isle of Wight and Surry. Food insecurity in the region was higher than the state rate.

Free Clinic services those in most need

The Western Tidewater Free Clinic, which served 1,223 patients in 9,942 visits in 2020 from Suffolk, Franklin, Isle of Wight and Southampton, continued to provide in-person visits during the year in spite of the COVID-19 pandemic, serving the poorest of the region’s population.

In that year, 80% of the clinic’s patients lived at or below 150% of the federal poverty level, which was at an annual income of $39,750 for a family of four, while 90% of them had multiple chronic diseases such as hypertension, heart disease and diabetes.