Tenor to perform for Sundays at Four 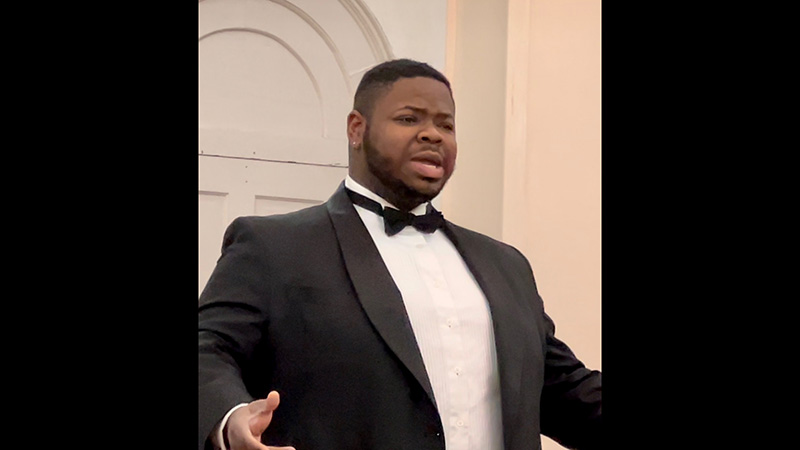 Ricky Goodwyn Jr., a senior at James Madison University who grew up in Western Tidewater, will perform at 4 p.m. Sunday, May 22, at Christ Episcopal Church as part of the Sundays at Four concert series. Goodwyn gave five recitals before his junior year. Most students give their first recital their senior year in college. His tenor voice has caught the interest of professionals, schools of music, and an audience that has followed him for almost five years. Though he was also accepted by the Peabody Conservatory of Johns Hopkins University and the Cleveland Institute of Music, he selected JMU in order to study with Dr. Kevin McMillan. Recently, he gave his senior recital in Harrisonburg. There will be a free-will offering collected at the concert with all proceeds and contributions going to Goodwyn for his education. He has been accepted to graduate school at both Cleveland Institute of Music and JMU. “This young man has reinvented himself and is traveling a new path in life away from homelessness,” said Mary Cole of Sundays at Four. “He greatly appreciates the support he has received from so many who believe in him. He continues to need our assistance in order to complete his educational goals. Please consider making a donation in his behalf.” Checks can be written to Ricky Goodwyn Jr. or To: PCCMI, For: Ricky Goodwyn, Jr. Scholarship Fund. PCCMI is a 501(c) 3 organization that manages a scholarship account for Goodwyn. Mail to PCCMI, P.O. Box 127, Smithfield, VA 23431-0127. (Submitted photo)