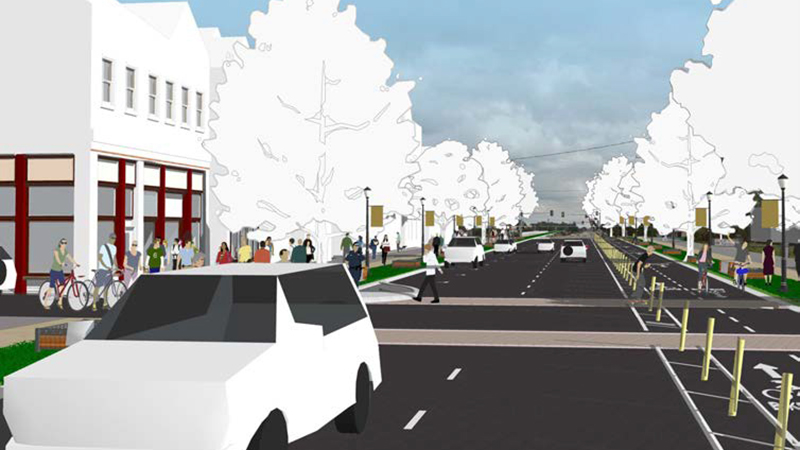 Smithfield’s Planning Commission deferred voting on the town’s updated comprehensive plan after requesting changes to the document at its May 10 meeting.

The town has been working with Summit Design and Engineering since last year to create the plan, which will guide land use decisions for years to come. Smithfield’s existing plan hasn’t seen major changes since 2009.

The plan lists, among its top goals, creating a more walkable South Church Street east of the Pagan River and reducing traffic throughout town, which the document contends can be achieved by “prioritizing” bicycles and pedestrians.

In accordance with the plan’s walkability focus, the future land use map shows areas along the South Church Street and West Main Street corridors, the Riverside Healthy Living Community on John Rolfe Drive and the former 1730s Pierceville farm and Little’s Supermarket at the western edge of the town’s historic district shaded in dark red as “new downtown mixed-use.”

The meeting included a public hearing, which drew three speakers who raised concerns over the plan’s call for “opening up the possibility that historic properties can be used in multiple ways in the blocks off Main Street.”

“As costs mount for maintaining historic properties particularly in the residential areas, it can be difficult to upkeep these properties unless they are subdivided into apartments or commercial uses,” the plan states.

Bill Harris told the commissioners there were “a number of rentals” on Grace Street that were “in bad shape” when he moved to the town’s historic district 30 years ago.

“Let’s not return to that,” Harris said.

“What makes the historic district so beautiful is that it is, for the most part, detached single dwellings,” added Theresa Mulherrin of Washington Street.

Jeff Brooks, a newcomer to Grace Street, said he’d learned his house had once been “chopped up, subdivided apartments” in “total disrepair” years ago.

“I’d really prefer not to go back to that,” Brooks said.

Randy Pack, the Town Council’s liaison to the Planning Commission, agreed “we do not need to subdivide these Victorian homes downtown,” and called for changing the historic district’s characterization in the future land use map back to how it had been designated in the 2009 plan.

In the proposed draft, the entire historic district is shaded in purple as “Historic District/Downtown Mixed Use.” In the 2009 land use map, only Main Street was shown as a mix of commercial and residential uses, with most of the other historic district streets listed as low-density single-family residential.

Per the changes the commissioners agreed upon, Main Street and Commerce Street would stay listed as “historic downtown mixed use” but the other streets within the historic district would be “historic downtown residential.” The paragraph recommending the subdivision of historic properties into apartments or commercial space would also be struck.

The commissioners anticipate voting on their formal recommendation to Town Council in June. The council will then have the final say as to whether the document is adopted or further revised.

Farmers Bank’s feud with ousted chairman intensifies ahead of…