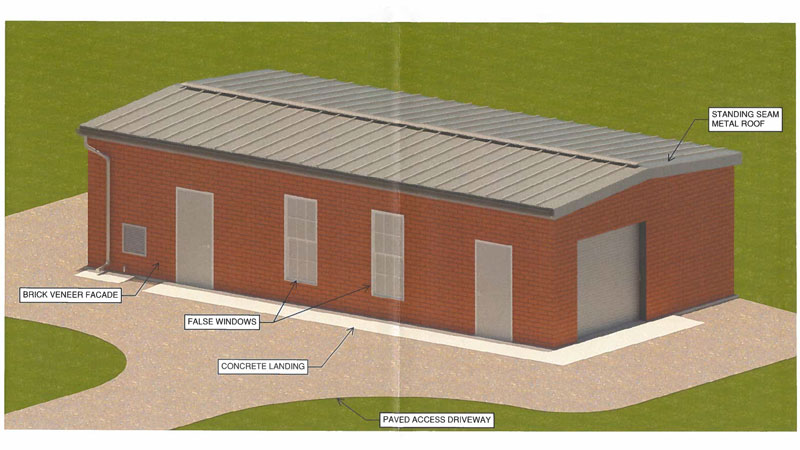 This rendering of the proposed booster station shows the building with a brick veneer and false windows. Courtesy | Isle of Wight County

As work continues on a new Hardy Elementary School, a separate project to supply the new school with drinking water from the town of Smithfield is also moving forward.

Isle of Wight County’s Planning Commission gave its assent May 24 for construction of a booster pump station on a 1-acre site off Old Stage Highway just outside the town limits.

Kenneth Turner, an engineer with Timmons Group, has applied for a conditional use permit for the station, and for an exception to the county’s Highway Corridor Overlay District requirements to allow a 6-foot-tall black vinyl chainlink fence.

The building itself would be a 20-foot-by-40-foot concrete structure with brick veneer and a gabled roof, accessible via a single gravel driveway and turnaround area.

Another pump house, located roughly a mile from the proposed station, has already been built at the Hardy site near where a 500,000-gallon water tower will eventually stand. Once operational, the tower, pump houses and a pipeline extending from Smithfield to the Hardy site would supply the new school and surrounding communities with treated drinking water purchased from the town.

The new infrastructure would allow the county to decommission well systems that for years have been plagued by high fluoride levels.

Per Smithfield’s agreement with Isle of Wight, the town would own the infrastructure located within its incorporated borders, while the county would own everything outside. Construction will be done in two phases.

Phase 1 would involve the installation of a 12-inch water main extending from the intersection of Thomas Street and Luter Drive in town, and the use of a directional drill to carry the water main across the Pagan River.

Phase 2 would extend the line from Berry Hill Road to the booster station and to Hardy Elementary via 8-inch and 12-inch mains.

The county is in the process of acquiring easements for the project, and expects to have both phases complete by June 2023.

Isle of Wight’s Planning Commission voted unanimously to give the requested permit and exception a favorable recommendation. Isle of Wight’s Board of Supervisors will have the final say on the matter this June.