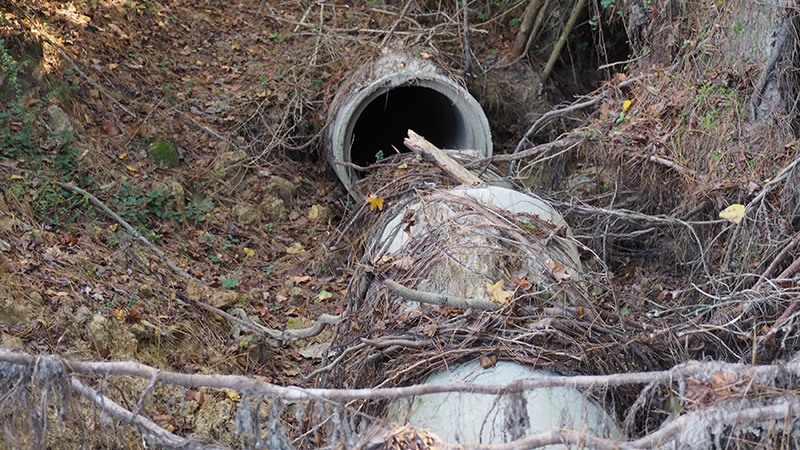 Otis Brock has been trying for years to get Isle of Wight County to take responsibility for the pipe, which has broken apart in multiple places. File photo

U.S. Magistrate Judge Lawrence Leonard on June 9 issued an order upholding his prior decision to exclude four witnesses from testifying in a lawsuit against Isle of Wight County over a collapsed stormwater pipe.

Carrollton residents Brian and Sue Fernaays and their neighbor Otis Brock had filed the lawsuit last year in federal court in Norfolk. It contends the pipe has been washing away their land since 2018, leaving a sinkhole that’s grown into a 12-foot-deep, 20-foot-wide chasm spanning the neighbors’ property line.

Though the pipe provides stormwater retention and drainage for public roads, the county contends it doesn’t own the easement in which the pipe is located and isn’t obligated to repair the damage.

The neighbors’ attorney, Joe V. Sherman, had planned to call John T. “Jack” Claud III and John “Steve” Ferguson, both of the Portsmouth engineering firm Hoggard-Eure Associates P.C., as expert witnesses in the pending trial, which was originally to begin April 5 but has since been delayed.

Also on his witness list was title examiner Patricia Raper, appraiser Dennis Gruelle and Realtor Nannette Criddle. In March, Leonard granted the county’s motion to exclude four of the five, characterizing their proposed testimony as “unreliable,” and ordered that Raper be allowed to testify only in a non-expert capacity.

Sherman appealed Leonard’s ruling in April, arguing that the court had “in effect substituted itself for the jury,” and left the neighbors with “no tangible evidence to support their contention.” Specifically, he asked that Gruelle be re-added to the expert witness list.

Leonard, however, contends there’s been no change in the law or facts of the case since his March ruling, writing in his June 9 order that the court will not “rethink what the Court had already thought through – rightly or wrongly.”