A lifelong love of July the Fourth 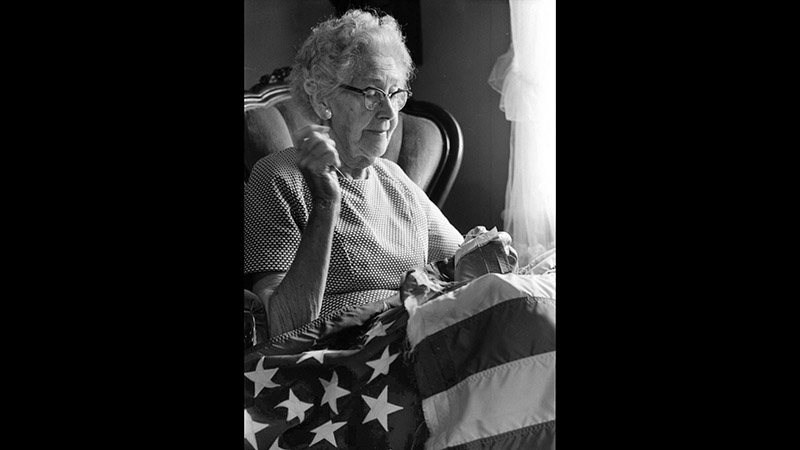 American men and women have lived proudly under their flag and have stood ready to mend it in time of need, as Miss Mamie Copeland of South Church Street is symbolically doing here. Somehow, gas shortages, higher prices and the prospect of rough sledding ahead seem to add a certain poignance to Independence. Early patriots were bold enough to first hoist the flag and Americans have since been bold enough to keep it flying. What sacrifices will we be willing to make for that “tattered ensign” if things go from bad to worse in the days ahead? Have a happy — and meaningful — Fourth of July. The Times Staff July 4, 1979

The Fourth of July is, and should be, a favorite American holiday. The nation’s birthday, the day when we mark what would become the boldest experiment in freedom the world has seen.

I always loved the Fourth. When I was a child, it was the annual date of a major family reunion, which we always attended — after we’d dug our white potato crop for the year. The Fourth was the traditional time to dig potatoes in this part of the world. In our case, potato digging was done on that day because we weren’t weeding peanuts on the Fourth, so our father found something else for us to do.

Newspapers and newspapermen love the Fourth also. Always have. It’s an opportunity to let our patriotism show and maybe renew our commitment to the republic as well.

I always had that feeling and, potato digging aside, when I returned to Smithfield and began working at The Smithfield Times, I continued looking forward to the Fourth. The challenge was how to best mark the holiday, and we tried to be creative.

The paper’s previous publisher didn’t have an editorial page. He just didn’t believe it was a necessary role for a small-town paper. Despite that, in 1973 I managed to sneak a short editorial onto Page One. It was innocuous, just a three-paragraph introduction to the Declaration of Independence, that simply paid homage to the signers. It was followed by a reprint of the Declaration’s introduction.

The next year, we got a little braver — and wordier. A six-paragraph commentary celebrated the courage of those who stepped forward to sign what could have been their death warrant if the Revolution had not succeeded. Accompanying it was a photograph of a town resident, a very young Bill Chapman, raising an American flag at his home.

When 1975 rolled around, we got a bit more creative. On July 2 of that year, we invited the Smithfield Little Theatre to help. SLT member Jim Orndoff dressed as Thomas Jefferson and we photographed him sitting down, “writing” the Declaration. The photo, published on Page One, was a hit. Ironically, the pose that Orndoff struck was almost eerily like the one in the bronze statue of Jefferson that Joe Luter would donate to the town more than two decades later. (Today, it sits outside of The Smithfield Center.)

The nation’s Bicentennial in 1976 was welcomed by newspapers across the country with features, special sections and other local contributions. We chose our June 30 edition, which was as close as we could get to the Fourth given the calendar’s coincidence with weekly publication dates, to salute local history.

We ran a Front Page of drawings done by county native Marilyn Saunders. Included were a horse-drawn plow, a market hog, a waterman tonging oysters and the Jamestown-Scotland ferry, as well as images of local buildings, including Historic St. Luke’s Church, the Isle of Wight Clerk’s Office, Bacon’s Castle, Surry Courthouse and the Grove.

In 1977, we joined Surry County in celebrating a little-known revolt that occurred a full century before the Declaration of Independence was signed. A group of planters in Surry had the temerity to criticize Royal Governor Berkeley for his demagoguery, including unfair taxes. The protest fizzled and the participants were fined for their brashness, but it was a warning that Virginians were willing to object when they considered their rights to have been violated.

We published one of my favorite staged events in 1979. That was a bad year for America, with fuel shortages and rapidly rising prices, so publishing something patriotic seemed appropriate.

We invited one of the community’s most beloved senior citizens, Miss Mamie Copeland, to sit for a photo. We draped an American Flag over her lap and Miss Copeland, a renowned local seamstress, took needle and thread to the nation’s symbol, figuratively repairing it. That photo, which is reprinted today, was about all that needed to be said on that Fourth of July so many years ago.