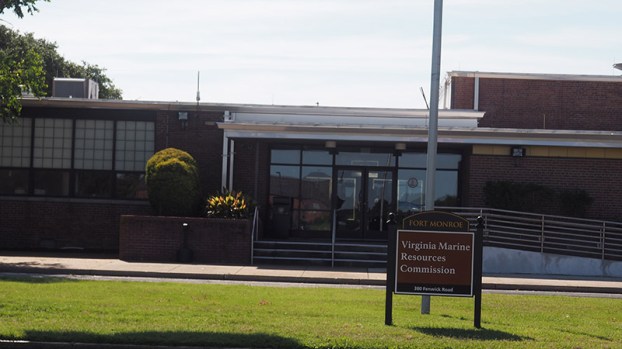 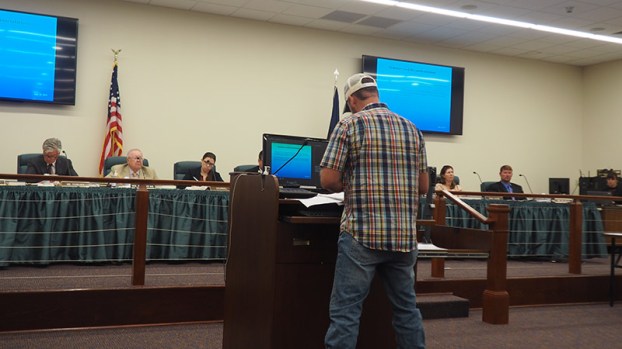 Abram Ketchum of Surry County speaks in opposition to Align RNG's pipeline plans at the VMRC's public hearing on the matter.

Editor’s note: This story has been updated to correct the proposed location of Align’s North Carolina facility.

The Virginia Marine Resources Commission has unanimously approved a proposed 65-mile biogas pipeline network that would cross the Blackwater River and two swamps at seven locations in Surry, Sussex, Southampton and Isle of Wight counties.

Align RNG, a joint venture of Dominion Energy and Smithfield Foods, secured approval on June 2 from the Surry County Board of Supervisors to build a regional processing facility that would turn methane from hog manure, also known as biogas, into pipeline-quality natural gas.

Methane, if emitted into the atmosphere, acts as a potent greenhouse gas, but according to company officials, emissions from farms can be captured using an anaerobic digester and covered lagoons.

Align’s multi-locality pipeline network, which the company proposes to bury a minimum of 14 feet beneath the substrate using a horizontal directional drilling method, would connect participating Smithfield Foods farms to the regional Surry facility. There, the collected gas would pass through membranes to remove hydrogen sulfide and carbon dioxide, leaving a 99% pure product that can be fed into an existing natural gas pipeline.

A group of Surry residents opposed to the county’s decision to allow the facility traveled to the VMRC’s Fort Monroe headquarters on June 28, hoping to stop the project at the state level by making their case to the commission’s nine-member board.

One of the sites where Align’s pipeline network would cross the Blackwater River “is behind my house,” Abram Ketchum of Dendron told the commission. “It’s pristine, mature growth, never-logged cypress and sweet gums. … With the plastic lines that they’re boring, what is to prevent the roots from penetrating those gas lines, and then you’ve got a disaster in the Blackwater River.”

Ketchum also referenced the lawsuit Align settled last year with the North Carolina-based environmental group Clean Aire NC, which had alleged violations of that state’s air quality regulations at a similar processing facility on the border of Duplin and Sampson counties. According to the settlement agreement, Align agreed to request that North Carolina’s Division of Air Quality modify the site’s permit to “add limitations on raw biogas flow,” impose “reporting requirements” for the facility’s sulfur dioxide and hydrogen sulfide emissions and “ensure a program of methane leak detection and repair is implemented at all farm operations supplying biogas” in exchange for Clean Aire NC agreeing to drop the case.

“I have no faith that this company will uphold any of their promises regarding emissions,” Ketchum said.

Align contends the reduction in greenhouse gas emissions from participating farms would be roughly equivalent to taking 22,000 vehicles off the road, even with the facility re-releasing an estimated 12 tons of extracted carbon dioxide annually. Company officials have also acknowledged not all the extracted hydrogen sulfide will be turned into solid sulfur and hauled away.

The amount that escapes the membranes will be fed into a thermal oxidizer – essentially an incinerator – where intense heat will transform the gas into less-harmful sulfur dioxide. Align anticipates the facility emitting around 8 tons of sulfur dioxide per year.

“When these hog farms came to Surry County originally several years ago, and I remember it well, one of the criteria for their location was that they be located away from populated areas,” added Surry County resident Helen Eggleston. “However, now for some unfathomable reason they seem to want to locate this pollution-producing industrial site to within a few hundred feet of occupied homes.”

Newly appointed VMRC Commissioner Jamie Green, however, told the speakers his board had “no jurisdiction” to consider air quality concerns.

Tim McHugh, a Troutman-Pepper attorney representing Align, when the commission afforded him the opportunity for rebuttal remarks, concurred with Green that the concerns the speakers raised regarding the central facility and lagoons were “beyond the scope” of the company’s requested VMRC permit.

While the processing facility itself would be the first of its kind in Virginia, the directional drilling technique Align plans to use when constructing the pipelines is “a technology that’s been used around the state,” said VMRC board member John “Ed” Tankard III, who made the motion that the board approve Align’s requested permit.