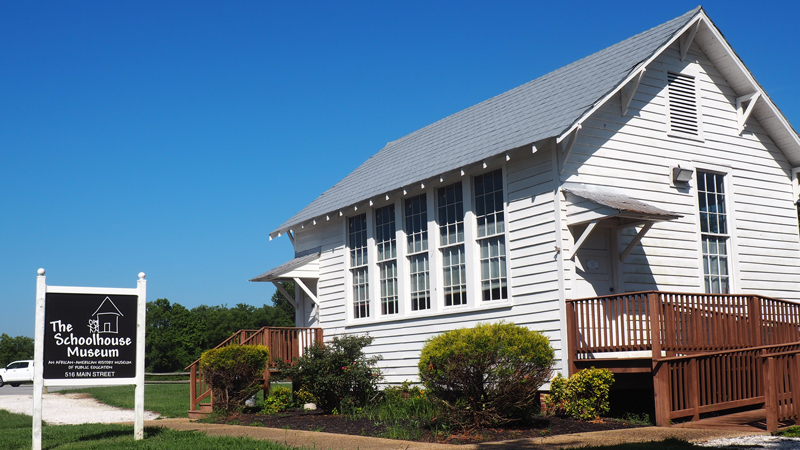 The Schoolhouse Museum is in the process of applying for a Virginia historical highway marker to be located in VDOT's right-of-way outside the circa-1932 building on Main Street. Stephen Faleski | The Smithfield Times

Editor’s note: This story has been updated to reflect there are 16 historical highway markers in  Isle of Wight County, not eight. Rick Bodson said he’d misspoken at the BHAR meeting.

Plans are in the works to add a Virginia historical highway marker at the Schoolhouse Museum in Smithfield.

Virginia has erected more than 2,600 such markers along its roadways since 1927. Sixteen are in Isle of Wight County, according to Rick Bodson, a member of the museum’s board of directors.

“Not one addresses the African American heritage of this county,” Bodson said.

The cast aluminum double-sided signs feature the state seal and black lettering against a silver background.

According to Bodson’s application, the Schoolhouse Museum highlights the African American educational experience in Isle of Wight County during the first half of the 20th century through a typical one-room structure of the era. It is housed in a 1932 addition to the Christian Home School, which once stood on the Isle of Wight side of the county’s border with Suffolk near the Chuckatuck community.

The original circa-1924 Christian Home School was built with Rosenwald funds. In the 1920s, according to the museum’s website, former Sears, Roebuck and Co. President Julius Rosenwald contributed $4.3 million ($73.6 million in 2022 dollars) to build more than 5,000 schools for Black students across the American south. Black communities raised another $4.7 million ($80.5 million in 2022 dollars) in matching funds.

The circa-1932 addition was moved in 2005 to its present site and renovated into a museum as the town’s Jamestown 2007 project to commemorate the 400th anniversary of the 1607 arrival of English settlers.

Bodson anticipates the proposed sign will take more than a year to be installed. Virginia’s Department of Transportation and Department of Historic Resources, which jointly administer the historic marker program, approve only five signs per quarter and have a current backlog of more than 50 applications, Bodson said.

A letter from the town confirming its approval of the historic marker is needed to complete Bodson’s application. Smithfield’s Board of Historic and Architectural Review gave its unanimous assent to the idea at its July 19 meeting.

According to Bodson’s application, the museum will fund the entire cost of the sign. VDOT will install and maintain the marker.

Once erected, the proposed sign will be the county’s fourth located within the town limits of Smithfield, joining the K243 marker at Smithfield station, which commemorates the town’s 1752 founding, the K316 sign noting the location of the 1750 Isle of Wight Courthouse on Main Street and the K329 sign marking Smithfield’s historic Ivy Hill Cemetery on North Church Street.