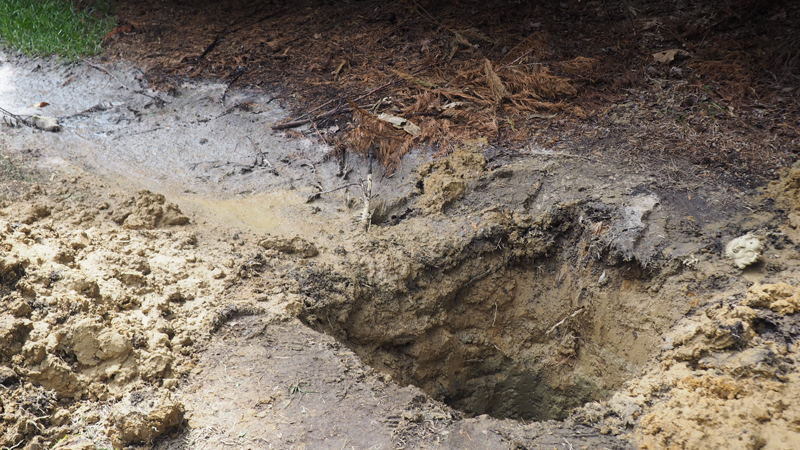 As of July 14, a hole and a brown-colored puddle spanning one side of Battery Park Road remained following a June 27 fire that occurred when lightning struck near a power pole. Stephen Faleski | The Smithfield Times

After rationing his water usage for two days, Trevor Clowesley’s life is nearly back to normal.

The Battery Park Road resident lives adjacent to a high-tension power line that fell during a June 27 thunderstorm, sparking an electrical fire that burned so hot it melted the pressurized PVC sewer pipe serving his home.

According to Dominion Energy spokesman Aaron Ruby, the damage and subsequent fire is believed to have been caused by a lightning strike either to the power pole or nearby trees.

At first, Clowesley didn’t notice anything amiss other than some burned trees and a brown-colored puddle spanning the ditch alongside the road. Clowesley initially assumed it was just muddy stormwater. The toilets in his home worked fine.

But get close enough to the fire’s point of origin, and the smell will give away the puddle’s true contents.

When Clowesley learned of the break in the sewer system last week, he began rationing his family’s water use, or more precisely, the amount of water going down the drain.

His home, he explained, is on a septic system that pumps roughly 100 gallons into the pressurized line when it gets too full.

As of July 14, there was only “a little bit of space left,” Clowesley said. “I can only do a little bit.”

Clowesley succeeded in getting his pump repaired the following day. Now he’s just waiting on a claim with Dominion Energy, hoping the electric utility will reimburse him for the nearly $1,900 expense.

Clowesley wasn’t the only homeowner to sustain damage as a result of the June 27 fire.

Jean Kukucka of the Gatling Pointe North development called Smithfield’s Volunteer Fire Department to her home, reporting that the electrical fire had blown her cable box.

The fire “blew up the whole side of my house,” Kukucka said, noting she had to replace some of her home’s siding at a cost of roughly $650.

According to the SVFD’s Facebook page, units responded to several calls around 6 p.m. relating to the thunderstorm, including Kukucka’s. Dominion and Spectrum cable crews were on the scene by 8:20 p.m.

Kukucka hopes the incident will spur Dominion to improve its response time and make the power pole near her home safer, contending the pole has been a repeated problem in bad weather.

Ruby, however, said Dominion could not find any records of past storm damage associated with that particular power pole.