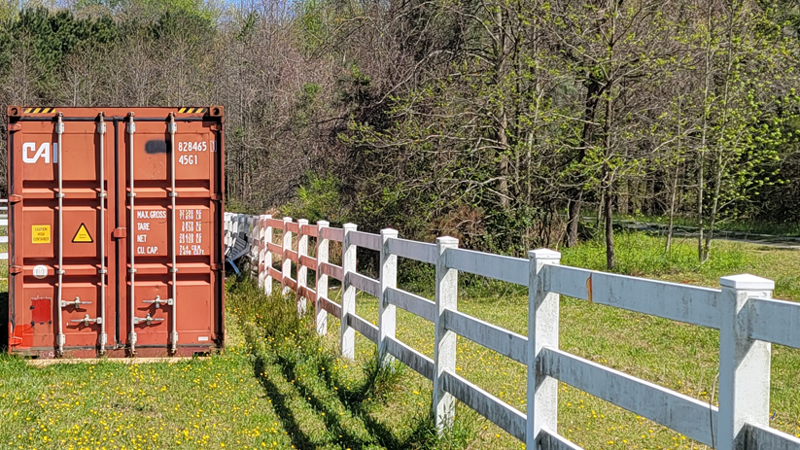 An orange-colored shipping container at a home on Jericho Road must be gone by Aug. 22, per the Smithfield Planning Commission's 4-3 July 19 vote. Courtesy | Town of Smithfield

A shipping container at a Jericho Road home must be gone by the Aug. 22 expiration of its temporary zoning permit.

Smithfield’s Planning Commission, in a rare 4-3 split, voted on July 19 to deny homeowners Justin and Amanda Emanuel a waiver to keep the corrugated metal structure on their property permanently and convert it into a storage shed.

The Emanuels, in June, had proposed painting the orange-colored container white, adding a pergola-style overhang to one side and erecting a fence to shield it from view of Jericho Road and the Route 10 bypass. The family then amended their proposal in July, offering to relocate the container behind a proposed addition to their home, clad it in vinyl siding and add a concrete pad foundation and roof to make it look more shed-like.

Their revised proposal won the support of Commissioner Michael Swecker, who argued the family had agreed to greater restrictions than what the town would require for a regular wooden shed, but not Vice Chairwoman Julia Hillegass.

Justin argued the precedent had already been set years ago, providing the commissioners with photos of other shipping containers being used as permanent structures elsewhere in town, including two with roofs at the Smithfield Recreation Association’s Beale Park on Moonefield Drive.

Swecker made a motion to approve the family’s request, provided they painted it, relocated it behind their home on a concrete foundation, added a roof and – at his request – added at least two windows. Swecker’s motion failed when Commissioners Michael Torrey, Dr. Thomas Pope, Hillegass and Chairman Charles Bryan cast dissenting votes.

“I am not for any shipping container being used as a storage container in the town of Smithfield,” Pope said.

The commissioners continued to debate the issue after Justin had left following the vote, with Town Attorney William Riddick III suggesting the town could check its records to see if waivers had been issued for any of the containers the Emanuels had photographed – and send similar notices of violation to the one Justin had received in the event the owners of those containers neglected to seek town approval.

“Just because they’ve been there for a long time doesn’t mean they get to stay,” Riddick said.