Electoral Board: candidates with ‘material omissions’ can stay on Nov. 8 ballot 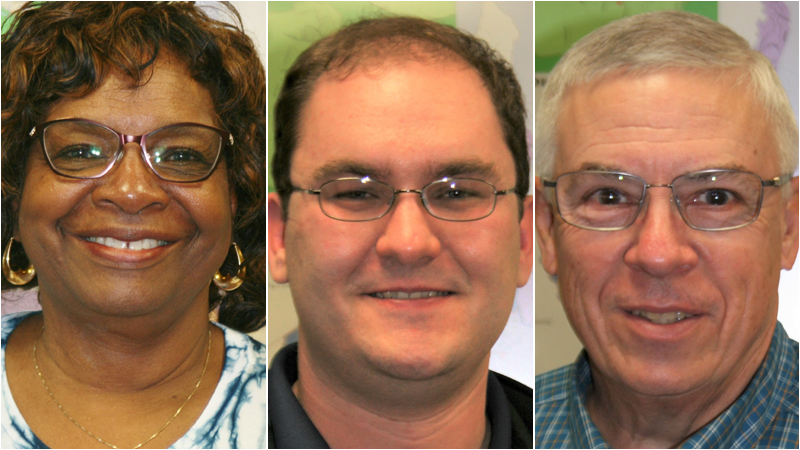 Isle of Wight County's three-member Electoral Board is allowing seven candidates with "material omissions" in their nominating petitions to stay on the ballot due to the discrepancies being discovered after they'd already been deemed qualified. Pictured from left are Chairwoman Inetha Holmes, Vice Chairman Caleb Kitchen and Secretary Geoff McFather. Courtesy | Isle of Wight County

Isle of Wight County’s Electoral Board is allowing seven candidates to remain on the Nov. 8 ballot despite having identified discrepancies in their nominating petitions.

Candidates seeking seats on the Smithfield and Windsor town councils and the Isle of Wight County School Board had until June 21 to submit petitions to the county Registrar’s Office bearing the required number of signatures from registered voters – 125 for Smithfield and the School Board, and 50 for Windsor.

After checking the signatures against voter registration records, Registrar’s Office personnel qualified 14 candidates but missed “material omissions” that, according to Electoral Board Secretary Geoff McFather, should have invalidated enough signatures to keep seven of the candidates off the ballot.

A “material omission,” according to Virginia’s Administrative Code, can include any combination of 11 scenarios such as the petition’s circulator failing to sign it in the presence of a notary or failing to provide his or her current address. If a material omission occurs, the entire page of signatures is to be rendered invalid.

The Electoral Board began more thorough scrutiny of the submitted petitions, McFather said, after learning of Freedom of Information Act requests from “three separate citizens” — one for Butler’s petition, one for Vines’ petition and one for Dial’s. McFather didn’t mention it during the meeting, but speaking to the Times by phone July 26, he confirmed there was also a FOIA request for the petition of Dial’s opponent, John “Mark” Wooster. McFather said he was unaware of the request for Wooster’s petition at the time of the meeting.

McFather declined to name the FOIA requesters. The Smithfield Times has since filed its own FOIA request for copies of correspondence between the requesters and the Registrar’s Office and/or Electoral Board.

​​Heidi Swartz, in an email to the Times on July 26, confirmed that she had requested Dial’s and Wooster’s petitions. The two candidates are both running for the Carrollton-area School Board seat.

“As a circulator, I wished to ensure I followed the standards,” Swartz said.

Candidates are allowed to task others with circulating their nominating petitions, in which case it is the circulator’s duty to have the petition notarized.

Butler questioned the motives of the requesters.

“What’s most disturbing is the three packets that were FOIA-ed were done (along) racial lines. … Actions like this will keep our community divided,” Butler said via an emailed statement to the Times on July 26.

She, Dial and Vines are the only three Black candidates among the 14. Wooster is white.

McFather, speaking to the Times July 26, said he didn’t see a racial bias on the part of the FOIA requesters, noting that the petitions with issues were for candidates “across the board, white, Black, male, female.” Rather than limit their investigation to the candidates whose petitions were FOIA’d, the Electoral Board reexamined all 14 petitions.

According to McFather, it is “not a routine practice” for the Electoral Board to be made aware of FOIA requests for candidate nominating petitions, as these are handled by staff at the Registrar’s Office. The board, he said, was initially only informed of the three requests for Butler’s, Dial’s and Vines’ petitions.

Butler was the only candidate to attend the July 25 meeting of the Electoral Board. Vines and Dial did not respond to the Times’ email or phone requests for comments by press deadline.

The only institution with the authority to have a candidate removed from the ballot for material omissions is a “court of competent jurisdiction,” according to Election Services Manager Dave Nichols’ email to McFather, which McFather read aloud at the Electoral Board’s July 25 meeting.

McFather blamed the initial lack of scrutiny on high turnover in the county Registrar’s Office, noting that Registrar Lisa Betterton’s entire staff “has moved on to other positions” or retired. The county only recently hired Susan Saunders, formerly with the city of Suffolk, as its new chief deputy registrar.

“These mistakes will not happen again,” McFather assured.

There is an “affirmative duty” on the part of the Registrar’s Office per state law to notify candidates who do not qualify, McFather added, but “you’ll notice what’s absent from that requirement is a date when that’s to be done.”

The date, he explained, is the same as the final day to submit paperwork ahead of an election, essentially putting the onus on the candidate to verify all components of a nominating petition comply with state law, and leaving those who make a mistake no time to fix it ahead of the filing deadline.

The Electoral Board ultimately voted unanimously in favor of McFather’s subsequent motion to allow all candidates whom the Registrar’s Office and state had initially deemed qualified to remain on the ballot, thereby declining to pursue a court action to have the seven removed.

But the seven candidates might not be entirely off the hook. The citizens who submitted FOIA requests for candidate petitions “may in fact go to court” and raise their own challenge, McFather said.

Vines, whom the School Board had appointed last year to fill Julia Perkins’ Windsor-area seat after she resigned, has already survived two court challenges this year. Windsor resident Lewis Edmonds, in March and again in April, filed separate recall petitions against Vines, both of which Circuit Court Judge Carl Eason dismissed.

Electoral Board Chairwoman Inetha Holmes noted that this was “the first time” in her nine years as a board member that the board had dealt with a FOIA request having revealed material omissions after a candidate was already deemed qualified.

“The cutthroatedness of our national politics has seeped down to the local level,” added Vice Chairman Caleb Kitchen. “It requires us as an office and a board to be more vigilant and diligent in making sure elections run smoothly.”