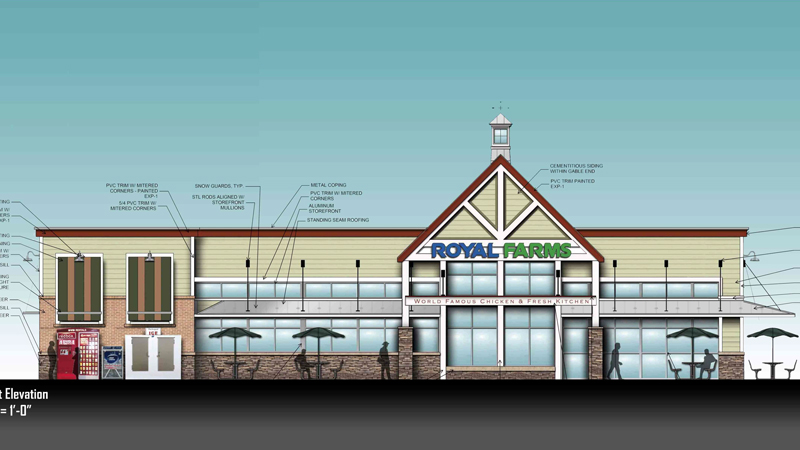 This rendering shows the proposed design of the Royal Farms convenience store planned for a commercial parcel in The Crossings development in Carrollton. Courtesy | Isle of Wight County

A proposal for a Royal Farms gas station in Carrollton is heading to Isle of Wight County supervisors with a favorable recommendation from the county’s Planning Commission.

The proposed 12-pump station, convenience store and drive-thru car wash would be located on one of several commercial parcels planned for The Crossings development along Carrollton Boulevard.

The development broke ground last year on its main access road, to be named Spadea Way, and an adjacent residential phase that, once complete, will include up to 240 condominium units.

While the car wash is a permitted use, Royal Farms is seeking a conditional use permit for the gas station and convenience store. The Planning Commission voted unanimously on July 26 to recommend approval of the requested permit.

Prior to the vote, the commission held a public hearing on the matter. It drew only one speaker: Smithfield attorney William Riddick III, representing Royal Farms, who told the commissioners there was “no better place in Isle of Wight County right now” for a gas station than at the Carrollton Boulevard-Brewer’s Neck intersection.

According to county staff, the proposed site is estimated to generate an average of 3,542 additional vehicle trips daily, though most will be “pass by” traffic from cars already on the road on their way to or from another destination. As such, the site isn’t expected to generate a need for road improvements beyond what’s already been planned.

The estimate amounts to a roughly 28% increase in traffic compared to the combined 16,024 daily trips 2010 and 2018 traffic studies predicted for The Crossings’ residential and commercial phases. The 2010 study estimated 11,814 trips in and out of the then-proposed shopping center that would have anchored The Crossings’ commercial phase. The 2018 study estimated another 668 trips in and out of the condominiums. Earlier this year, Isle of Wight supervisors approved Virginia Beach-based developer Jerry Bowman’s proposal to scrap the shopping center plans in favor of subdividing the commercial phase into multiple, smaller parcels.

Royal Farms’ application is the first commercial proposal for The Crossings to go before the Planning Commission. According to Amy Ring, the county’s director of community development, Isle of Wight had received two additional applications as of March from commercial businesses seeking to locate in The Crossings: one for a Hardee’s and the other for a medical office building.

Bowman said in March he was also courting an “upscale” grocery store and movie theater for the development’s commercial phase.

Electoral Board: candidates with ‘material omissions’ can stay on…