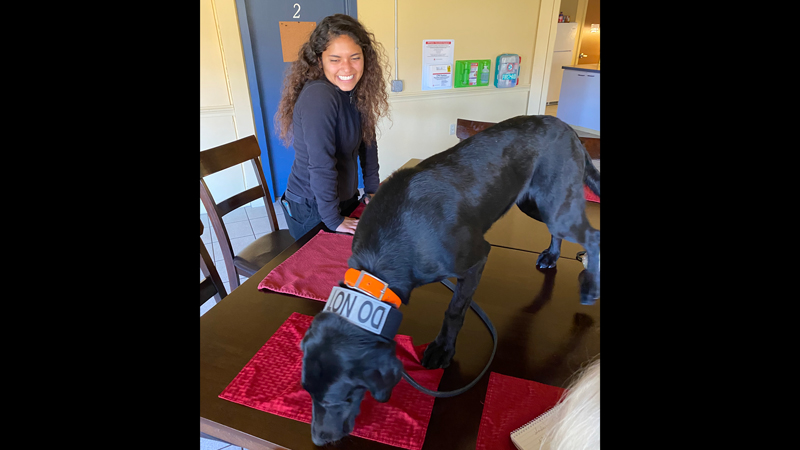 American K-9 Interdiction has proposed bringing dogs to Isle of Wight County Schools to sniff out firearms and drugs. Here, Sandra Garduno and her dog, Indie, enjoy a few down moments at American K-9 in this March 2021 file photo by John H. Sheally II.

Gun-sniffing dogs could be in Isle of Wight County Schools’ future.

“A few months back, we were contacted by the Hampton city schools,” Roushia, an ex-Navy dog handler, told Isle of Wight’s School Board on July 28. “They had gun problems. They had vape problems. They came to us and said, ‘Can you fix it using dogs?’”

The resulting pilot program proved “phenomenal,” Roushia said. “We even found a 40-caliber magazine hidden in a urinal. … You cannot fool them. You cannot hide it. If it’s there, they’re going to discover it.”

American K-9, he explained, uses non-aggressive, primarily floppy-eared mobile-odor-detecting or “MOD” dogs, specially trained to sniff out the scent associated with firearms. The pilot program in Hampton entailed having the dogs rotate between the city’s schools in four-hour blocks four days per week.

“They can get it past the metal detectors; those kids are innovative,” Roushia said. “But they all like to test their ‘toys’ so they’re going to leave that residual odor.”

In the event a dog detects the scent of firearms on a student’s person, the dog is trained to follow that student until school personnel or law enforcement can intervene.

“Nobody’s ever been bitten,” Roushia said.

Isle of Wight has far fewer gun incidents than Hampton, having reported only one incident in its 2022 school security audit in which a weapon was found on school property. The School Board called the special July 28 meeting for the purpose of reviewing Isle of Wight’s current precautions and potential added security layers in the wake of the May 24 mass shooting at Robb Elementary in Uvalde, Texas. Roushia was one of five security experts the School Board invited to speak that evening, the others being Isle of Wight Emergency Services Coordinator Will Drewry, Windsor Police Chief Rodney “Dan” Riddle, Isle of Wight Sheriff James Clarke Jr. and Tim Mallory, director of safety and security services for Norfolk Public Schools.

During its 2022-23 budget development cycle and particularly since the Uvalde shooting, Isle of Wight’s school system has renewed its push for resource officers in each of its nine schools. Currently, four sheriff’s deputies are assigned as resource officers: one in each of the county’s two high schools and one in each of the two middle schools. Patrol deputies also routinely visit the county’s five elementary schools but aren’t stationed there every day. Isle of Wight County’s adopted 2022-23 budget calls for funding an additional SRO who would rotate between the elementary schools.

Following the Feb. 14, 2018, shooting at Marjory Stoneman Douglas High School in Parkland, Florida, Isle of Wight County Schools undertook an $840,000 divisionwide revamping of its security measures, which included the purchase of a badge-swipe system for accessing doors, high-definition security cameras and “Nightlock” classroom door barricades. The Nightlocks were subsequently removed after they were found to be in conflict with state building and fire codes.

American K-9’s dogs could be a “force multiplier,” said School Board member John Collick, meaning they would serve as another layer of security and make the existing SROs more effective in deterring violence.

“We are not there to replace SROs by any means,” Roushia said. “We are there to augment them.”

The dogs can also detect drugs.

“Most of our discipline is vaping,” said Isle of Wight Assistant Superintendent Susan Goetz.

“The beauty of”” American K-9’s solution, Roushia added, is that the dog’s handlers don’t carry guns.

“Another gun is not going to solve the gun problem,” Roushia said.