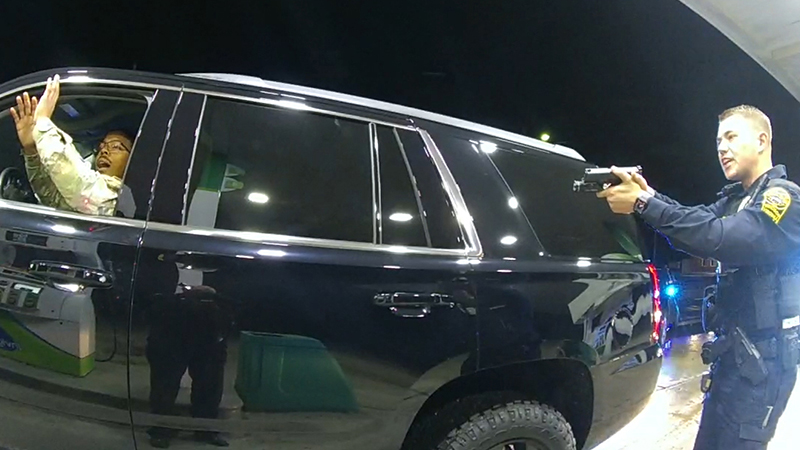 Windsor Police Officer Daniel Crocker’s removal of a firearm from Army 2nd Lt. Caron Nazario’s car during a Dec. 5, 2020, traffic stop was “unlawful,” but he and ex-officer Joe Gutierrez had “probable cause” to pull him over, a federal judge ruled on Tuesday.

U.S. District Judge Roderick C. Young granted “summary judgment” in Nazario’s favor at the Aug. 9 hearing, rejecting Crocker’s claim that his search was protected under the doctrine of qualified immunity, which shields police officers from misconduct lawsuits. Young also granted summary judgment in Crocker’s and Gutierrez’s favor, finding their qualified immunity defense applicable to Nazario’s claims that the officers “unreasonably prolonged” the traffic stop, used “excessive force” and infringed on his free speech right by threatening to arrest him and inform his Army superiors if he didn’t “let this go.”

Summary judgment allows a judge to rule in favor of one or more claims a plaintiff makes, or dismiss them, without the matter ever going before a jury if – in Young’s words – the matter is “so one-sided that one party must prevail as a matter of law.”

The ruling marks the latest development in Nazario’s ongoing lawsuit against Crocker and Gutierrez. It accuses the two white officers of racially motivated police brutality for having held the Black lieutenant at gunpoint while they shouted conflicting commands at him to keep his hands out of his car’s window and exit the vehicle. Video footage of the incident, which went viral in April 2021 and led to Gutierrez’s firing, culminates with Gutierrez repeatedly pepper-spraying Nazario and using knee strikes to force the lieutenant out of the car and onto the ground.

Crocker and Gutierrez had pulled Nazario over for allegedly lacking a rear license plate. Nazario had a temporary New York plate taped to the inside of his car’s rear window, but the officers said they didn’t see it and accused the lieutenant of eluding police for having driven roughly a mile down Route 460 to a BP gas station before stopping.

From the video, it is clear the officers “did have probable cause” to stop Nazario as “the rear license plate was not in the correct position” and “was not visible,” Young writes, and also would have been justified in charging the lieutenant with eluding.

In similar situations, Young writes, courts have found that failing to immediately pull over can constitute eluding, even when the reason is well-intentioned, as the officer has no way of knowing the reason for the suspect’s delay. Given that Nazario “refused to comply with a lawful order to exit his vehicle,” there was also “probable cause” to charge Nazario with “obstruction of justice and failure to obey.”

That said, a  “reasonable officer” would have been aware of state and federal protections from warrantless searches. At the time of the search, there was “nothing to suggest” Nazario’s possession of the weapon was unlawful, and Nazario was handcuffed, incapacitated by pepper spray and surrounded by Gutierrez and medics – making the search not only unconstitutional but also a violation of a Virginia law barring warrantless searches and one of the few exceptions to qualified immunity, the judge ruled.

Young is also allowing Nazario’s claims of state-level “assault and battery” and “false imprisonment” violations to move forward to a jury trial, citing that Virginia has “sovereign immunity,” rather than “qualified immunity” for police. Sovereign immunity, he writes, shields officers from negligence claims but not intentional wrongdoing.

Aside from deciding whether the officers’ conduct violated state law, the only other jury questions – according to Nazario’s attorney, Jonathan Arthur – are how much money to award Nazario in damages for Crocker’s search, and whether Gutierrez has “bystander liability.”

Bystander liability, Young writes, refers to situations when an officer knows a fellow officer is violating a person’s constitutional rights, has a reasonable opportunity to prevent the harm, but chooses not to act. Gutierrez contends he had no knowledge of Crocker’s search at the time it was occurring.

Attorneys for Gutierrez have not responded to The Smithfield Times request for comments by phone or email. Crocker’s attorney, Anne C. Lahren of the firm Pender & Coward P.C., issued the following statement on behalf of her client:

“We agree with Judge Young’s ruling that Officer Crocker and Officer Gutierrez were entitled to qualified immunity on Caron Nazario’s core constitutional claims of unreasonable seizure, excessive force, and First Amendment violations. The ruling correctly holds that the traffic stop was lawful as were the commands given by Officers Crocker and Gutierrez that Lt. Nazario repeatedly refused. By refusing to follow commands and resisting the officers, Lt. Nazario’s own actions gave rise to the unfortunate, but lawful, escalation of force wherein Nazario was pepper sprayed, removed from the vehicle, and handcuffed. Had Lt. Nazario simply followed the lawful commands of the officers from the outset of the traffic stop, none of this would have been necessary. State law claims for assault, battery, and false imprisonment present classic jury issues and are rarely decided on motions for summary judgment and Judge Young’s ruling on those claims is in line with our expectations at this stage of the litigation. With regard to the one issue on which Judge Young ruled for Lt. Nazario, we firmly believe that Officer Crocker’s brief verification of the firearm in Nazario’s vehicle before releasing him, was reasonable and lawful.”

Isle of Wight County’s NAACP chapter, which had called for an end to qualified immunity for police officers last year in the wake of the release of the video footage, issued the following statement upon learning of Young’s ruling:

“We concur with our State Conference and will support all efforts to advocate and end qualified immunity. We will continue to work toward improving education and training to end biases in law enforcement. Other professions, such as doctors, lawyers are held responsible for their actions to include their negligence. Police (officers) should also be held accountable for their actions.”