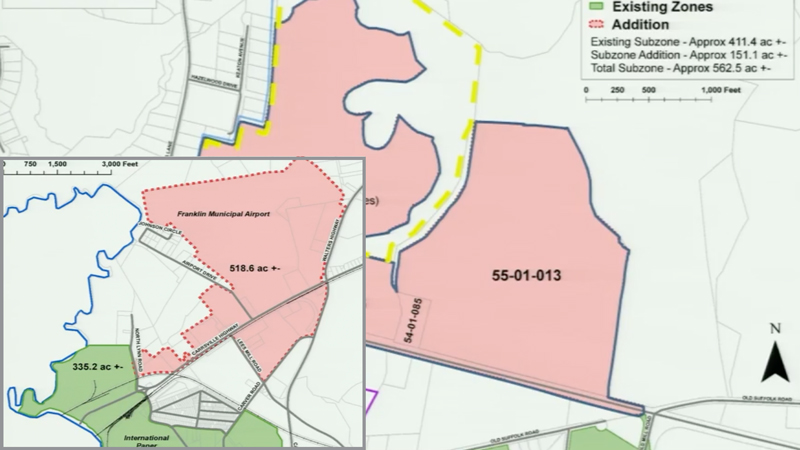 Isle of Wight County is proposing to add 670 acres to an “enterprise zone” it shares with Southampton County and the city of Franklin.

Businesses that agree to invest $100,000 or more in the designated areas become eligible to receive state and local economic development incentives.

According to Chris Morello, Isle of Wight’s director of economic development, the county currently has 2,438 acres spread across two “sub zones,” one encompassing phases two and three of the Shirley T. Holland Industrial Park and the other bordering the city of Franklin near International Paper’s Franklin mill. Localities are allowed a maximum of 3,840 acres, meaning Isle of Wight could potentially expand its zones by up to 1,402 acres.

Morello is only proposing to expand by 670 acres at present, 519 of which would encompass the Franklin Regional Airport and an adjacent industrial park. The remaining 151 acres would be located on the opposite side of Route 460 from the Cost Plus World Market distribution facility just outside the limits of the town of Windsor.

The airport dates to the 1930s when the Great Depression-era Civilian Conservation Corps constructed a single dirt runway on the site. During World War II, the Navy took over the administration of the airport, renaming it Navy Auxiliary Air Station Franklin. After the war, the Navy turned the airport over to the then-town of Franklin, though the facility is technically located on Isle of Wight’s side of the Blackwater River. The airport now has a 5,000-foot runway and has operated as a city of Franklin-managed facility since the 1980s.

“This has so much potential to really be a part of the economic fabric of the county,” Morello said.

According to Morello, businesses that invest $100,000 or more to rehabilitate or expand an existing structure in an enterprise zone, or at least $500,000 to build new, can qualify for a state “real property investment grant” of up to $100,000 per building or facility, or up to $200,000 if investing at least $5 million.

Isle of Wight County offers its own local version of the job grant, which pays an additional $500 per job per year for up to 20 new full-time positions, provided the jobs pay at least 150% of the federal minimum wage. The county further offers to waive permit fees, fast-track the permitting process.

Expanding an enterprise zone requires approval from Virginia’s Department of Housing and Community Development. According to Morello, Isle of Wight’s application will require “proof of endorsement and agreement” from Franklin and from Southampton County. Isle of Wight plans to hold an Oct. 20 public hearing on the matter, but hearings are not required for the other two member jurisdictions, Morello said.

Isle of Wight’s goal is to submit its application to DHCD by the end of October, Morello said.