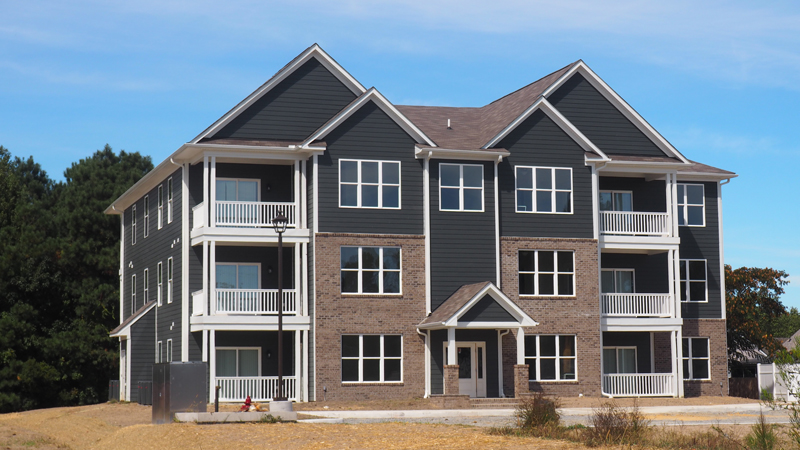 Jerry and Lucy Kooiman got Isle of Wight County’s approval in 2018 for urban residential zoning to permit the construction of Heritage Apartments, a three-story, 12-unit multifamily building on Sugar Hill Road. Though they’d submitted plans calling for a 34.5-foot-tall building, putting them just under the 35-foot maximum specified in the county’s zoning ordinance, county officials ordered work to stop in January when they discovered the building was in fact 37.25 feet in height.

The Kooimans appealed to county supervisors in March and were granted an exception on the condition that they plant a row of trees at the property line at least 12 feet tall at the time of their planting to create a landscape buffer.

Now, the developers say they’ve been unable to find a sufficient number of 12-foot trees, and are requesting that the specified height at planting be lowered to 10 feet. They’re proposing to instead plant 34 Thuja “Green Giant” trees.

According to the Kooimans, the tree species they’ve chosen can grow up to 40 feet, nearly double the minimum 25-foot-at-maturity requirement the county had imposed as a condition of the building height exception.

With construction now complete, the couple is hoping to have the trees in place by the end of October and receive their occupancy permit and begin accepting tenants before the end of the year.

“Next month is the time to plant,” Jerry Kooiman said. “We’re really in a time crunch.”

The Planning Commission ultimately voted to recommend approval of the Kooimans’ request to modify the conditions of their height exception, despite having received one letter in opposition from Steve Turner, a resident of the adjacent Carrollton Meadows housing development.

The commissioners, reading Turner’s letter into the record, noted Turner had written that “it was agreed upon by the builder that this would take place.”

The trees, he argued, are “needed to block out the noise of six compressing units facing the Carrollton Meadows side of the project” and to block visibility of the apartment building from the residents of four homes on Spring Crest Drive located adjacent to the Kooiman lot.

Despite the couple’s plea for immediate action, Commissioner Thomas Distefano initially motioned to table the matter until after the Kooimans had submitted a revised site plan. But the motion failed in a 5-5 tie, with himself and Commissioners Jennifer Boykin, George Rawls, Rick Sienkiewicz and Matthew Smith voting in favor and Commissioners James Ford, Cynthia Taylor, Raynard Gibbs, Bobby Bowser and Brian Carroll voting no.

Distefano noted that the original agreement specifying the 12-foot trees had been negotiated with the Carrollton Meadows homeowners association, of which Turner is currently president. Ford, however, said it wasn’t clear from Turner’s letter whether he was speaking for himself or on behalf of the homeowners association.

“If Mr. Turner is representing the HOA then he should have noted that in his letter,” Ford said.

Bowser then motioned that the commission recommend approval of the Kooimans’ request, conditioned on a new discussion occurring between the developers and the homeowners association. It passed 9-1. Carroll cast the dissenting vote, telling The Smithfield Times after the meeting that he would have preferred the developers to adhere to the conditions to which they had initially agreed.

The matter will head back to the supervisors for a final vote on Oct. 20.