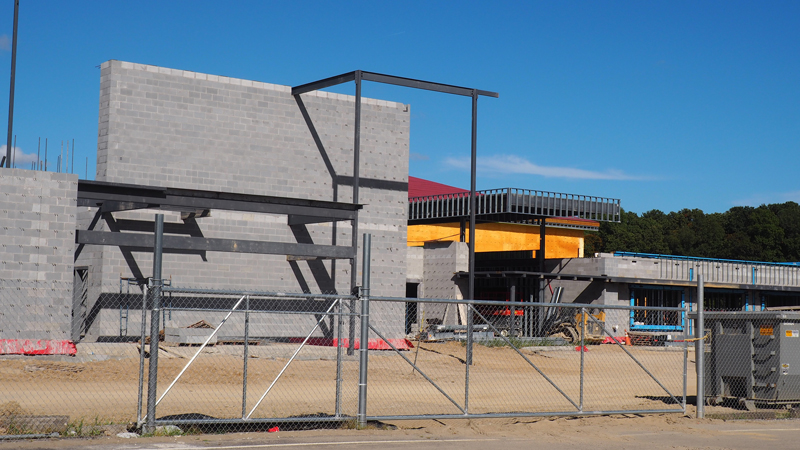 Construction of a new, larger Hardy Elementary School is on track to be finished by mid-2023. Stephen Faleski | The Smithfield Times

The first meeting was scheduled for Oct. 3, but canceled due to expected flooding and high winds from the remnants of Hurricane Ian. A new date has not been finalized yet.

The Windsor High session is still on schedule for Oct. 5 from 6-7 p.m., at 24 Church St., Windsor. Those unable to attend either meeting can comment online at https://forms.gle/wnVGB8UQz4tzDTVAA.

According to Assistant Superintendent Dr. Christopher Coleman, U.S. construction cost trends for July 2022 had “forecast a 14.1% year-over-year increase in construction costs by the year end.”

“That’s labor, material, and costs continue to rise,” Coleman said. “Escalation should stabilize to the 2% to 4% range in 2023 and 2024 on par with historical averages” though “costs for some materials may remain volatile.”

The capital improvements plan advertised for the Sept. 8 public hearing “lacked those adjustments,” Coleman said, recommending that the School Board defer action until school staff can provide the “most updated information” at the community meetings.

The first proposed change to the capital improvements plan involves moving up the date for a proposed redesign of all nine schools’ lobbies to include “vestibules” — a security measure that entails enclosing an area at a school’s main entrance so visitors would need to check in with the school’s office before gaining access to the rest of the building.

The school system received an estimate of $290,000 for the project about 18 months ago, at the time planning to implement the renovation during the 2025-26 school year. The School Board revisited the idea in the wake of the May 24 mass shooting at Robb Elementary in Uvalde, Texas. As of August, the project cost had more than tripled to an estimate of $901,000.

In addition to the new cost, the draft capital improvement plan changes now list the project as beginning during the 2023-24 school year.

The second revision entails moving up the timeline for replacing Smithfield High School’s grass football field with artificial turf. Originally scheduled for the 2025-26 school year, this too is now proposed to begin during the 2023-24 school year. The project is now projected to cost $2.4 million, up from the original $1.5 million estimate, due to increases in the price of materials.

The School Board held its public hearing on the proposed changes Sept. 8, but opted to defer action pending further, less formal input from residents.

During the hearing, School Board candidate Mark Wooster advocated against moving forward with the artificial turf, claiming studies had shown it to be more likely than regular grass to result in player injuries.

A 2018 study published in the American Journal of Sports Medicine, citing that “synthetic turf surfaces do not release cleats as readily as natural turf,” found that “play on synthetic turf resulted in a 16% increase in lower extremity injuries per play than that on natural turf.” The National Football League’s official injury reports from 2012 to 2018 further showed that non-contact knee injuries occurred at a 32% higher clip and non-contact foot or ankle injuries were 69% more likely on artificial fields, according to Associated Press reporting.

Four parents of Smithfield High School band members, and two students, also used the opportunity to advocate for increasing the priority of renovations to the school’s band and chorus rooms.

The School Board had proposed the band and chorus room renovations in 2020, proposing at the time to remove the wall dividing the two classrooms.