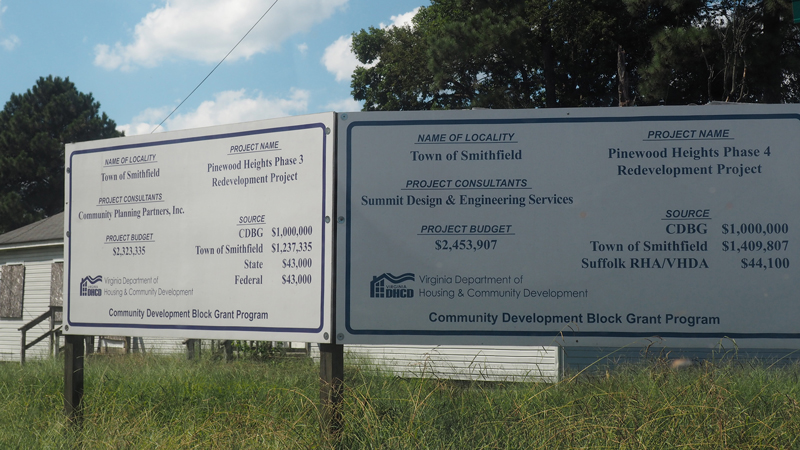 Verizon is proposing to erect a communications tower in the former Pinewood Heights development. (Sept. 16, 2021 file photo by Stephen Faleski | The Smithfield Times)

The Smithfield Town Council is open to the idea of leasing land in Pinewood Heights for a Verizon tower.

The town has been working for years with the Virginia Department of Housing and Community Development to acquire and convert the former residential neighborhood behind the Smithfield Foods meatpacking plants into a town-owned industrial park. Sites Unlimited Inc. recently contacted town staff on behalf of Verizon about building a nearly 200-foot tower on two Jamestown Avenue parcels.

The tower would be a 195-foot monopole, surrounded by a 6,400-square-foot fence, and would include a 4-foot lightning rod for a total of 199 feet. According to Verizon, that’s just under the 200-foot threshold where the Federal Aviation Administration would require the tower to be lighted to warn passing aircraft at night.

On Nov. 1, the council decided by consensus to allow Sites Unlimited to proceed with submitting a formal application for a special use permit. Smithfield’s zoning ordinance would require the base of the tower to be located at least 99½ feet back from any property line or any adjacent non-residential structure, unless the Town Council grants a waiver.

Verizon is proposing a five-year lease with the option of four five-year renewals, at a rate of $800 per month with a 1.5% increase each year. According to town staff, the payment would bring just under $50,000 to Smithfield in rent at the conclusion of the first five-year period.

Though they’re allowing the application to proceed, some council members expressed reservation about the concept.

Councilman Randy Pack noted that the tower would have to be “able to fall and not hit anything.”

“I don’t believe the area they’ve requested is large enough for a 200-foot tower,” Pack said.

Town Attorney William Riddick III noted that with the town’s and Isle of Wight County’s water main extension for the new Hardy Elementary set to come online by mid-2023, Smithfield is approaching a time when its plans for Pinewood Heights “might actually come to fruition.” The new water line, which will extend past the Smithfield Foods plants up Route 10, will also serve the Pinewood Heights area, according to a 2021 memorandum from Town Manager Michael Stallings.

According to a memorandum from Community Development and Planning Director Tammie Clary, the applicant has also expressed prior interest in parcels off Pagan Avenue, also in Pinewood Heights.