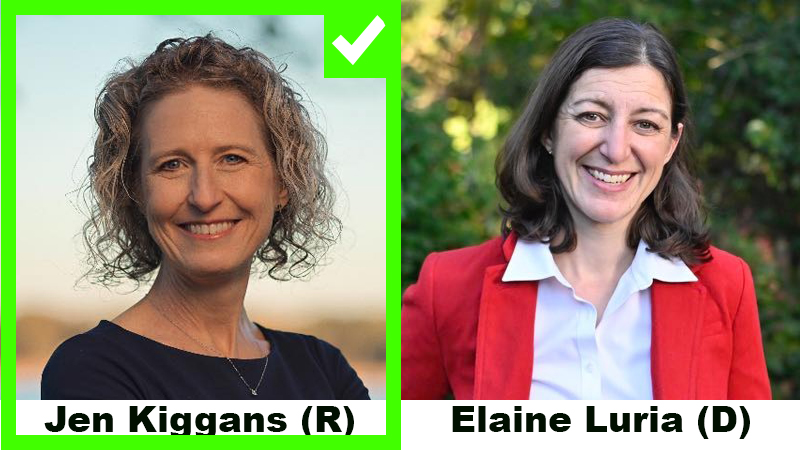 According to unofficial results from last week’s midterm elections, Kiggans defeated Luria with 51.8% of the vote to Luria’s 48%, with 244 out of 247 precincts reporting as of Nov. 14.

At the end of 2021, the Virginia Supreme Court adopted redistricting maps based on the 2020 Census that moved Isle of Wight County, Suffolk and Franklin into the battleground 2nd District, which Luria had carried with 52% of the vote in 2020. The district now spans from parts of Southampton County through Virginia Beach and up the Eastern Shore.

Kiggans carried Accomack, Isle of Wight and Southampton counties, while Luria carried Northampton County and the cities of Franklin and Suffolk. Kiggans received nearly two-thirds of the Isle of Wight vote, at 61.3% to Luria’s 38.5%.

As of Nov. 10, all localities had completed their counts of in-person, early and absentee ballots but had yet to total any provisional or post-election ballots.

The two former naval officers – Luria a retired commander and Kiggans a former helicopter pilot – have run heated campaigns against each other over the past several months.

Kiggans has called Luria an “extremist” for supporting abortion access, a topic that’s reignited passions on both sides of the political spectrum since the U.S. Supreme Court overturned its landmark Roe v. Wade ruling earlier this year.

Luria, who sits on the House committee investigating the Jan. 6, 2021 storming of the U.S. Capitol by former U.S. President Donald Trump’s supporters, has called Kiggans an “election denier” and accused her of “dishonoring the oath” she took to the U.S. Constitution by perpetuating baseless claims of voter fraud in the 2020 presidential election. Kiggans has acknowledged U.S. President Joe Biden’s 2020 win over Trump, but would not say at a debate in Smithfield that Biden had won fairly.

The Associated Press declared Kiggans the winner at 11:03 p.m. Nov. 8. Luria conceded the race in a statement posted to her campaign’s Facebook page a few minutes after.

“We set out to be good and do good work in 2018, and that is precisely what we have done,” Luria wrote. “Together, we built a movement from the ground up and went to work every day for the people of Coastal Virginia. We supported small businesses and working families through COVID-19, passed historic infrastructure investments, secured the largest expansion of veterans’ health care in our lifetime, grew our Navy, and strengthened our military to defend our interests and allies abroad. I am immensely proud of the good work we have done to deliver for Hampton Roads and make the United States of America a better place for everyone.

“I chose Coastal Virginia to be home more than two decades ago, and it has been the honor of my life to represent and serve the people of Hampton Roads in Congress. Though the results were not what we wanted, I want to thank everyone for their support over the past four years. The peaceful transition of power is a cornerstone of our democracy, and I congratulate Jen Kiggans on her win and wish her success. I have instructed my team to be as helpful as possible to ensure a smooth transition and continue providing seamless constituent services to the people of Coastal Virginia.”

Kiggans issued the following statement at a victory party in Virginia Beach:

“We’re here to celebrate — not the victory of a political party — but the victory of a new day for our Commonwealth and our country. We’re here to celebrate a renewed commitment to restore American strength—a commitment to restore a strong economy, strong schools, strong communities, and a strong national defense. This celebration would not have been impossible without the hard work and support of the people in this room.”

Kiggans then thanked her supporters, congratulated Luria on her campaign and told Luria’s voters, “I know there are important areas where we may disagree, but I hope to earn your respect, and maybe, in time, your future support.”

With 36 Democratic-held Senate seats and 29 Republican-held Senate seats not up for election, the 14 Democratic-called races will allow the Democrats to maintain control of the Senate, with Vice President Kamala Harris serving as the tie-breaker. In December, incumbent Sen. Raphael Warnock, D-Ga., will again face Republican challenger Herschel Walker in a runoff election.

Editor’s note: This story has been updated based on absentee and provisional ballot totals reported Nov. 14