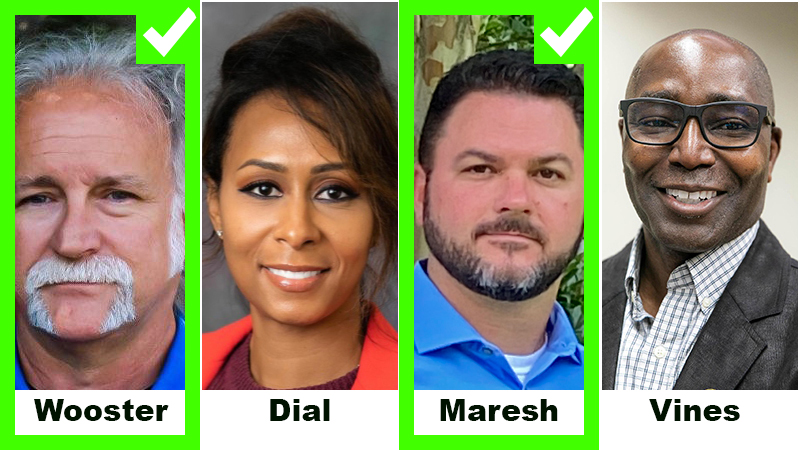 John "Mark" Wooster and Jason Maresh each won their bids for a seat on Isle of Wight County's School Board, according to preliminary results from Tuesday's elections.

Isle of Wight County’s School Board will have a new conservative majority as a result of last week’s election.

According to unofficial results, John “Mark” Wooster won his bid to oust incumbent Renee Dial from the board’s District 2 seat with 57% of the vote to Dial’s 42%.

There were 3,599 total votes cast across District 2’s six precincts, including 13 write-in votes accounting for less than half a percent of the total.

Five of the six precincts — the sixth being absentee and provisional votes — had reported their totals the night of the election. By the evening of Nov. 14, nearly a week after the election, Isle of Wight County’s Electoral Board had counted the 163 provisional ballots cast countywide. Provisional ballots include votes by residents who register to vote the same day as an election, or who requested an absentee ballot but chose to vote in-person instead. The Electoral Board typically counts provisional votes the Friday after an election but had to wait until Monday due to Nov. 11 being Veterans Day, a federal and state holiday.

The results were to be certified Nov. 15.

In a concurrent race for the District 4, formerly Windsor District, seat, Jason Maresh won his bid to oust incumbent Michael Vines, with 68.4% of the vote to Vines’ 30%. District 4 votes totaled 3,512, including 54 write-ins that accounted for 1.5% of the total.

“For once in my life I’m at a loss for words,” Wooster told The Smithfield Times.

He thanked supporters, including “everyone who has volunteered their time and worked on my campaign from Day 1.”

Maresh, speaking to the Times, said he was “ready go get to work” and was “looking forward to being a voice for parents.”

Both challengers billed themselves as the conservative choice in their respective races, each running on a platform of opposition to what they termed “divisive” and “sexually explicit” learning materials.

They’ll likely find a kindred spirit in board member John Collick, who last year won the District 5 seat after securing the endorsement of the county’s Republican Party and campaigning on a platform of opposition to transgender student policies and the perceived influence of Critical Race Theory in public education.

In 2021, a group of county residents – Maresh among them – began accusing the board and school administrators of using equity and inclusion efforts to promote tenets of Critical Race Theory, which argues laws and institutions have perpetuated inequalities among minorities. Maresh had taken specific issue with Smithfield High School’s “Read Woke” challenge, contending in a letter last year that the social justice-themed books available at the school’s library “disparage white people as privileged, inherently racist, oppressors and victimizers.” The pushback continued this year when parents Heidi Swartz and Candice Vande Brake unsuccessfully petitioned the board to remove apps containing LGBTQ-related and what Swartz termed “partisan” content from all school-issued iPads.

Dial was unable to be reached by phone or email for comments. Vines, speaking to The Smithfield Times Nov. 14, said Maresh won “fair and square.” Vines then noted he’d “decided not to actively run” for the position by making campaign signs or any other solicitation of votes.

Dial and Vines were both appointed in 2021 when their respective predecessors, Vicky Hulick and Julia Perkins, resigned halfway into four-year terms set to end in 2023.

At the School Board’s Nov. 10 meeting, Superintendent Dr. Theo Cramer presented Vines with a plaque recognizing him as a “dedicated public servant” and for “doing what’s best for all children of District 4.” Dial was absent from the meeting.

When special elections are held to fill an unexpired term, the winner is allowed to take office as soon as the results are certified. Wooster and Maresh, once sworn in by Isle of Wight County’s clerk of circuit court, will be able to take their seats in time for the board’s December meeting.

Editor’s note: This story has been updated based on absentee and provisional ballot totals reported Nov. 14.