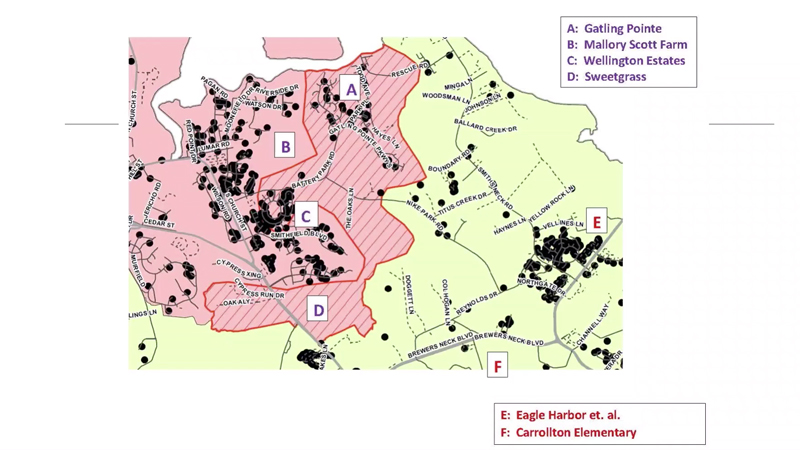 Isle of Wight County Schools presented this map showing the proposed redrawing of the attendance zone boundary between Hardy and Carrollton elementary schools. Students in red-shaded areas would attend Hardy, while those outside the red zone would attend Carrollton. Black dots represent the approximate location of currently-enrolled students. (Image courtesy of IWCS)

To avoid overcrowding at Carrollton Elementary from new housing developments, Isle of Wight County Schools is proposing to move some Carrollton students to the new Hardy Elementary next school year.

Currently, students from Smithfield’s Wellington Estates neighborhood and the Gatling Pointe development just outside the town’s limits attend Carrollton, but would move to Hardy under a proposed redrawing of the school division’s attendance boundaries.

Based on the division’s current attendance zones, the new school would open at 58% of its capacity.

Under the proposed rezoning, any students who move to the 812-home Mallory Pointe development set to break ground next year along Battery Park Road, or the proposed – but not yet approved – 685-home “Sweetgrass” development slated for land behind the Sherwin Williams store just outside Smithfield, would also move from Carrollton to Hardy.

East West Communities, the builder of the 776-home Benn’s Grant development, had proposed a second Benns Church Boulevard development known as “Sweetgrass” in 2019, according to past reporting by The Smithfield Times. At the time, Sweetgrass was proposed to be an age-restricted community, making its impact on Isle of Wight County Schools likely minimal.

The proposed rezoning would increase the new Hardy’s enrollment to 68% of its capacity, while bringing Carrollton down to 82%.

The new Hardy, modeled after Florence Bowser Elementary in Suffolk, was “never intended to resolve overcrowding at Carrollton,” Deputy Superintendent Susan Goetz told the Isle of Wight County School Board at a Nov. 10 meeting.

Its main purpose, she said, was to replace the 1960s-era Hardy, which had “outlived its useful life.”

In the future, Carrollton Elementary will also need to absorb any students from a 191-lot expansion of the Red Oaks mobile home community on Benns Church Boulevard, 179-home St. Luke’s Village development on Brewers Neck Boulevard, and three additional Route 17 developments that will collectively add another 345 homes – all of which are approved but haven’t broken ground.

Westside Elementary, which houses 733 students in grades 4-6, is presently the division’s most populous elementary school, and another 1960s-era building slated for replacement. Division officials had originally intended to move Westside’s fourth-graders back to Carrollton when the new Hardy opens, so that both Hardy and Carrollton would become PreK-4 schools, but “looking at the numbers, it’s just not going to be possible,” Goetz said.

The School Board plans to hold a public hearing on the proposal at its Dec. 8 meeting and take action by February, with the changes taking effect July 1.