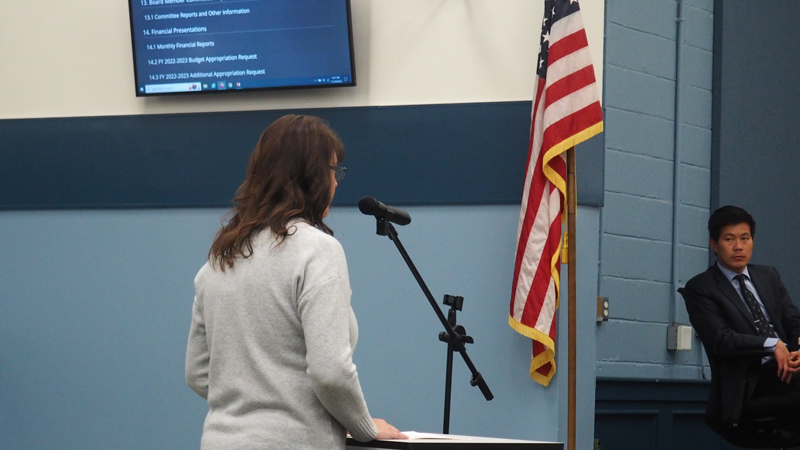 Isle of Wight County Schools Chief Financial Officer Rachel Trollinger has resigned, telling School Board members on Nov. 10 she could “no longer in good conscience” stand before them “and state that the school division was being good stewards with county or taxpayer funds.”

She’d rejoined the school division as its CFO on Aug. 1 following the departure of her predecessor, Steve Kepnes, in May. Trollinger had previously served in the finance department from July 1, 2016, through Jan. 1, 2021.

According to the personnel report the School Board approved at its Nov. 10 meeting, Trollinger’s resignation was effective Oct. 24.

Speaking during the meeting’s public comment period, Trollinger said she’d discovered evidence while working on year-end bookkeeping for the 2021-22 school year in preparation for an upcoming audit that federal grants awarded to the division had gone “unprocessed in a timely manner,” resulting in “over a $5 million cash flow shortage.” Federal funds, she contended, had also been forfeited, and a donation from one of the division’s local vendor partners had gone unspent by the June 30 end of the 2022 fiscal year, “resulting in the division giving these funds back to the county.”

Trollinger further contended the division had missed the deadline for submitting its 2021-22 Annual School Report Financial Section. According to a July 29 Virginia Department of Education memorandum, all school divisions were required to submit the report by Sept. 15. Isle of Wight, however, didn’t do so until Oct. 5.

The Oct. 5 report, which Trollinger contends is inaccurate, “could not be reconciled” to the school division’s finance system, she said.

“Bank reconciliations were not performed for over an entire year,” Trollinger said, contending “an entire quarter” of food service transactions spanning April, May and June of this year “were not reported in the financial system.”

The allegedly inaccurate Oct. 5 report lists IWCS started the 2021-22 school year with just over $1.5 million and received $75.9 million in revenue throughout the year. The division reported just over $76 million in expenditures, including $3.8 million in school food services, resulting in a roughly $1.4 million end-of-year balance as of June 30.

“Although none of these items are illegal, these egregious errors and countless others discovered in the last five months resulted in a domino effect throughout the division and the county, to include auditor deadlines,” Trollinger said.

Trollinger’s predecessor, Kepnes, had served as the division’s executive director of budget and finance, and later as CFO, from October 2020 through June of this year. The Smithfield Times was unable to reach Kepnes by press deadline for comments on his departure.

Trollinger told the School Board she’d initially accepted a contracting position with IWCS in May “when the CFO position was unexpectedly vacated.” Trollinger then said she had again been asked to stay on as a contractor following her resignation.

“I declined the offer but have continued to assist in ensuring payroll is not delayed and have answered countless questions by school and county staff, to include some as recent as this afternoon,” Trollinger said at the Nov. 10 meeting. “I still love this school system and want only the best for the division, the staff and the students.”

Isle of Wight County Schools’ central office did not respond by press deadline to the Times’ request for comments on Trollinger’s allegations.

The auditing firm Robinson, Farmer, Cox issued IWCS an “unmodified” opinion in an Aug. 19 audit limited to the division’s extracurricular school activity funds. An unmodified or “clean” opinion is an industry term used by the American Institute of Certified Public Accountants when auditors determine an organization’s financial statements are presented fairly.