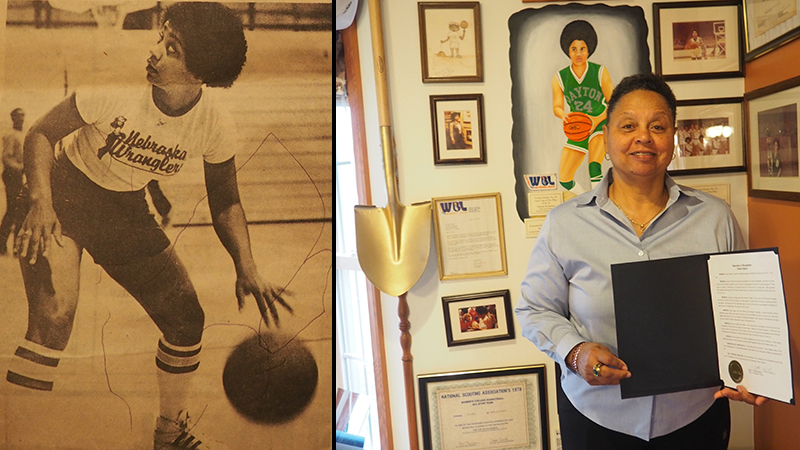 Left: The Smithfield Times published this photo of Vivian Greene in 1981 from her final season in the Women's Basketball League with the Nebraska Wranglers. Right, Greene holds up the proclamation Smithfield Mayor Carter Williams read at the Town Council's Nov. 1 meeting, standing in front of a painting of herself in her Dayton Rockettes jersey.

Hampton Roads Sports Hall of Fame inductee Vivian “Sweet Viv” Greene is a living legend in more ways than one.

In 1975, her freshman year of college, Greene was named most valuable player at the first-ever National Collegiate Athletic Association women’s basketball tournament, earning her the subsequent honor of becoming the first female athlete to receive a three-year, full-tuition scholarship to Norfolk State University under Title IX, a 1972 federal civil rights law that expanded athletic scholarship eligibility to women.

She later became the first woman at Norfolk State to win the Joseph G. Echols Award, which, prior to Greene, had been intended only for outstanding male student-athletes. She was also the first Norfolk State athlete – male or female – to have her jersey retired.

By 1979, she’d been drafted to play professionally in the Women’s Basketball League, a forerunner to what is today known as the Women’s National Basketball Association, or WNBA.

She’s now been offered the opportunity to become the Smithfield High boys basketball team’s first female assistant coach. New hires, including coaches, require School Board approval, so it’s not official yet. Isle of Wight County Schools spokeswoman Lynn Briggs, however, confirmed there is a “mutual interest” in having Greene return as a coach to her high school alma mater.

For Greene, working and playing alongside male athletes is nothing new.

“I was considered a tomboy,” Greene said. “As kids, we didn’t really have much to play with. … Whatever the boys were doing, I was doing it.”

She grew up in Smithfield’s Pinewood Heights neighborhood, a collection of now mostly demolished houses behind Smithfield Foods’ meatpacking plants, which the town has been working for years to turn into an industrial park. By 1969, Greene’s father had moved the family to Rushmere.

Greene credits her cousin Billy with helping her develop her shot and aggressive playing style.

Different people, mostly boys, from Isle of Wight and neighboring Surry County would challenge the two to games on the weekends.

“I would shoot their eyes out. … I loved the game,” Greene quipped.

“I wasn’t frightened of getting hit or knocked down. … You’re rough with me, I’m going to get physical,” Greene said. “That’s in the game. Don’t think because I’m a girl I’m going to get timid.”

When she entered high school, “They’d never seen a girl play like I played,” Greene said.

There, she met teachers who taught her the fundamentals of the game and helped her get into Norfolk State. In college, she met Norfolk State women’s basketball coach Doris Mangrum and Athletic Director Bill Archie, whom she credits with helping her stay in school when her parents’ financial situation worsened.

“My parents couldn’t afford to send me back to college,” Greene said.

It was Archie who arranged for her to be given the three-year, full-tuition scholarship to cover her sophomore, junior and senior years.

“He had the influence, ability and power to help me,” Greene said.

At the time, “I didn’t look at myself as a trailblazer,” Greene added. “We were just playing ball; that’s all we desired to do, to play sports.”

Greene also credits God and the various teammates she’s played with throughout her high school, college and professional career for her success.

“I’m a living witness … and I’m not ashamed to talk about Jesus Christ, because he is my savior,” Greene said.

Her college team, Greene said, had to practice on Sundays and during lunch breaks, ultimately earning four championships over her four college years.

“We had less but we made the best of what we had,” Greene said. “I’m proud of those girls. Wherever they are, I hope they are proud of what they did too. I hope they have made a room at their homes and made their own hall of fames just like I’ve made mine.”

Greene’s Rushmere home includes a room filled with memorabilia and trophies from her high school, college and professional sports careers.

“This is my blood, my sweat and my tears,” she said.

By 1979, she’d finished her four years of college and only needed to complete her student-teaching to receive her degree in health and physical education. But the newly formed Women’s Basketball League had other plans for her, and offered her the opportunity to submit her name for the draft.

With her parents’ blessing – and a promise to them that she’d someday return to complete her degree – she was drafted by the Washington Metros, and later that same year by the Dayton Rockettes, and began playing in games across the nation.

“A lot of times we traveled on a bus or van; it all depended on the money situation,” Greene said, noting the owners of the eight initial teams in the league had funded the games with their own personal fortunes.

From Dayton, she transferred to the St. Louis Streak and the Milwaukee Does.

By 1981, she’d transferred again to the Nebraska Wranglers, where she played in the league’s championship game in Omaha. The game proved to be not only the season’s end, but the league’s as well. By the end of the year, the owners’ money had run out and the league had folded due to lack of investors.

“A lot of us left there owed money,” Greene said.

During her time with the league, Greene met managers of a heating and air conditioning company called McCarthy’s who would often go to her games. When the league folded, McCarthy’s offered her a job delivering parts to construction sites. She ended up staying in Nebraska for three more years, working at McCarthy’s. She also took up an interest in softball and would play with an amateur team during her off-hours.

“I had a regular job just like everybody else,” Greene said.

Eventually, she did honor her promise to return to Virginia and finish her teaching degree, but decided a public school classroom wasn’t for her. While student-teaching, she’d interviewed with Dominion Energy’s Surry Power Station and was offered a job.

Greene ended up staying with Dominion for 32 years and learned to shoot three different weapons as a security officer, and was later promoted to alarm station operator.

Greene scored a total of 2,386 points throughout her basketball career – a Norfolk State record. Already a member of Smithfield High’s and Norfolk State’s Hall of Fame, with both schools having retired her jersey, Greene will be formally inducted into the Hampton Roads Sports Hall of Fame at a Nov. 20 banquet at the Norfolk Scope Arena.

But with the pending job offer from Smithfield High, it seems basketball may not be finished with Greene yet.