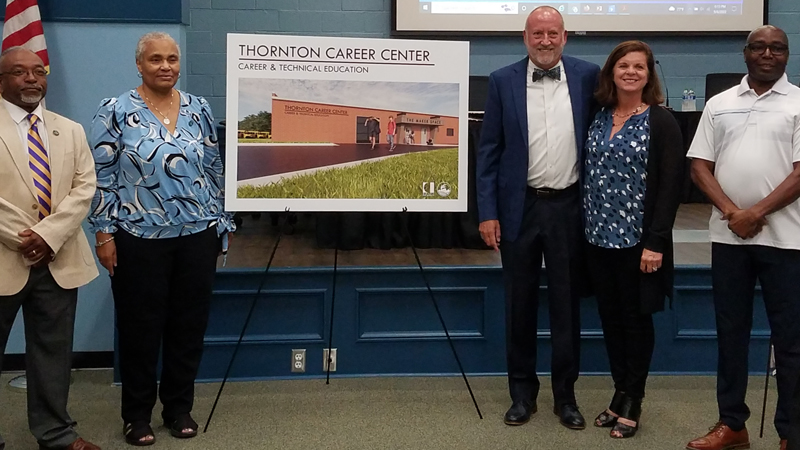 Isle of Wight County’s School Board will wait until December to reauthorize its policy for naming schools and facilities.

School Board Policy FFA currently reads “no school will be named for a living individual,” and specifies schools can only be named for people “who have been deceased for at least 10 years.” It was one of 33 policies up for the board’s review and approval Nov. 10 but was pulled from the slate at the request of Board Chairwoman Denise Tynes.

The delay comes amid controversy over the board’s announcement of plans to rename Smithfield High School’s career and technical education building for retired – but still living – Superintendent Dr. Jim Thornton.

The current wording is identical to the Policy FFA the School Board voted to approve on March 12, 2015. But according to School Board records, the board revoted on June 11, 2015, on a slightly different version of Policy FFA, which added the words “or school facility” to the prohibition on naming schools for living people.

On June 9, coinciding with the board’s announcement of plans to rename the CTE building for Thornton, Isle of Wight County Schools officials uploaded the March 2015 version to the school division’s website. As of Oct. 10, the school division had taken the position that naming the CTE building for Thornton wouldn’t constitute a violation, as Policy FFA would only apply to renaming Smithfield High School itself.

According to an Oct. 20 memorandum from Superintendent Dr. Theo Cramer to the School Board, which The Smithfield Times obtained via a Freedom of Information Act request, there had been no version of Policy FFA listed on the division’s website from early 2016 through June 9.

“Unbeknownst to staff at the time, there was another version of Policy FFA that was approved by the board in June 2015,” Cramer wrote. “As there was no information to show the policy had ever been repealed, and it was believed by staff that the March 2015 policy was the operative version at that time, the March 2015 version of the policy was added to the website on June 9, 2022.”

Neighboring school systems in Suffolk, Franklin and Southampton County, however, all include the “or school facility” language in their prohibitions on renaming buildings for living people.

Kenita Matthews, director of communications for the Virginia School Boards Association, confirmed to The Smithfield Times by phone on Nov. 25 that the model Policy FFA language the VSBA disseminates to local school boards does include the “or school facility” language in the policy’s prohibition on naming a building for a living individual.

Thornton, who retired July 1, had overseen a multimillion-dollar, countywide renovation of the school division’s CTE facilities in 2017. The detached SHS facility became home to Isle of Wight County schools’ new welding, nursing, engineering, manufacturing and culinary arts program – including a student-run restaurant named “Turner & 10” for the school’s location at Route 10 and Turner Drive. The School Board had voted 3-1 on Sept. 8 to make the renaming official. Board member John Collick had cast the dissenting vote.