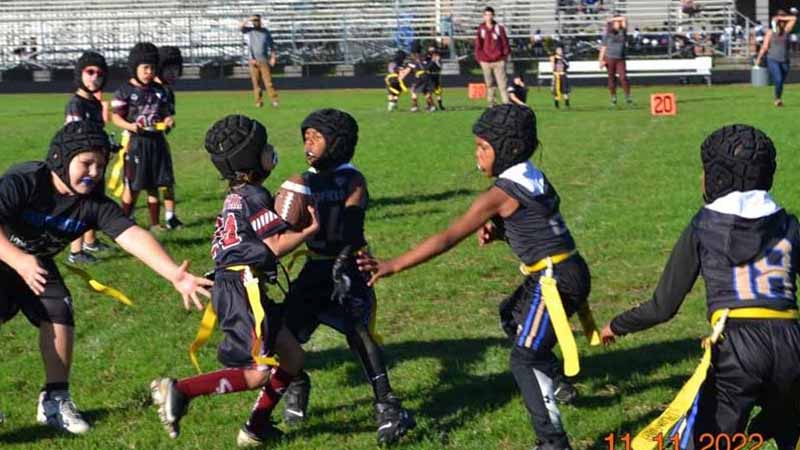 Smithfield Packers Youth Sports hosted the second round of the 2022 Peninsula Youth Football and Cheer Organization playoffs over the weekend at Smithfield High School. The sixth-seeded Smithfield 6-and-under Flag Blue team defeated the No. 4 Backriver Bulls 25-0 in the early contest, and in midday action the third-seeded Smithfield 14U team defeated the No. 4 Tri-Citi Hurricanes 6-0 in overtime. In other play the top-seeded 8U VA Eagles squad defeated the No. 4 seed Back River Bulls, the second-seeded 10U VA Eagles defeated third-seeded Williamsburg Hornets (Black), and the 12U top-seeded Deer Park Titans defeated the No. 5 VA Eagles. This week the Peninsula Youth Football and Cheerleading Organization Super Bowl will see the Smithfield 6U Flag Blue team facing the No. 7 Deer Park Titans in a rematch of a week 3 contest, which the Packers won 25-6, and the No. 3 14U team will meet the top-seeded VA Eagles in a rematch of a week 9 contest. Also over the weekend, SPYS hosted its annual Hamtown Veterans Classic at Smithfield High School, where seven programs were represented across six games. The Packer 8U team started the day with an 25-19 overtime loss to HC Fire, followed by the Packer 6U Flag (combined) falling to the York Seaford Falcons. In the early 10U contest the East End Vikings, despite being down 7-0, were declared the winner (via forfeit) in their contest with the Virginia Beach Mustangs after the Mustangs ceased competition in the fourth quarter following the ejection of a coach. In the later 10U game, the Packer squad defeated the Peninsula Saints handily by a score of 20-0. Rounding out the evening both the Packer 14U and 12U teams defeated the Churchland Tigers 13-0 and 34-0, respectively. For more information on the SPYS program, visit www.smithfieldpackers.org. (Submitted photos)