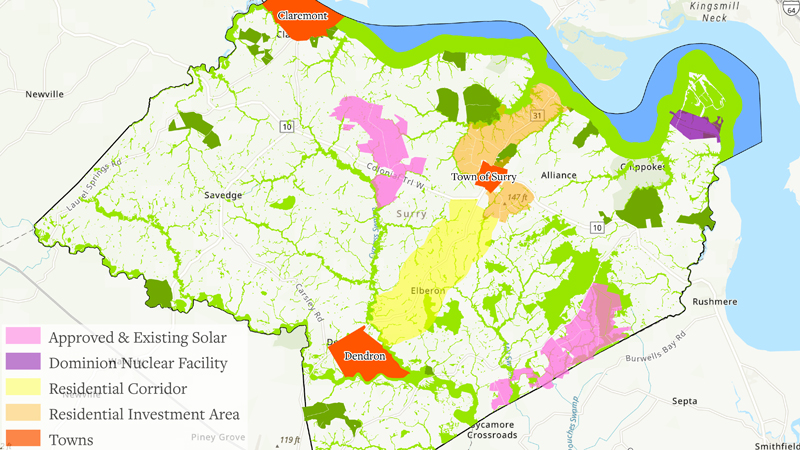 The proposed energy policy includes this map showing where Surry's solar and nuclear power facilities are located. In light and dark green are conservation areas and wetlands. Not pictured is the Align RNG "biogas" facility approved earlier this year. (Image courtesy of Surry County)

While aimed primarily at limiting the number and location of new solar farms, the policy is intended to be inclusive of all energy sources, including Dominion Energy’s existing nuclear plant.

The amendment proposes limiting utility-scale energy project sites to 10% of the county’s land, subtracting water and wetlands, for a maximum of 15,278 acres. Of this, 9,263 acres are already taken up by existing and approved utility-scale solar farms and the nuclear plant. Another 22.8-acre parcel at the Surry-Sussex county line is slated for Align RNG’s “biogas” processing facility, leaving just under 6,000 acres available for future energy projects.

Energy projects looking to site within the available 6,000 acres would need to be located within a mile of high-voltage transmission lines, and would be restricted to siting at least half a mile from any historic site, per the proposed policy’s current wording. Energy projects would further be restricted to at least 750 feet from any place of worship or cemetery, and at least half a mile from any other existing community-scale or utility-scale energy facility.

The hearing drew four speakers, three from Surry and one from outside the county.

Sam Edwards of the county’s Surry District said in his opinion, the proposed energy policy “steps on those rights” of landowners looking to sell or lease their farms to solar developers or other energy companies, and would “eliminate the vast majority of land acceptable for solar.”

Surry had kicked off the amendment process in May by surveying 181 county residents. The survey, according to county staff, yielded a “general consensus that Surry County already has enough utility-scale solar projects.” But the 181 respondents, Edwards argued, account for under 3% of the county’s roughly 6,500 residents.

Sheryl Allen, also of the county’s Surry District, agreed that the survey likely didn’t give an accurate sampling of a majority of residents, but she contended the proposed energy policy is “much improved from what exists.”

Surry last revised its Comprehensive Plan in 2020. The 142-page document, intended to guide land use decisions, makes no distinction between utility-scale and non-utility-scale solar setups. It then specifies solar farms are to “avoid or minimize” impacts to farmland, be screened and located outside of residential investment areas, not visually impact scenic or cultural resources, and be sited “as close to existing electric transmission lines as possible.”

The proposed amendment would define “utility-scale” as any energy storage facility with a rated capacity greater than or equal to 20 megawatts, used to generate electricity beyond the area in which the facility is located. “Shared solar” or “community-scale” energy facilities generating 1 to 19 megawatts and requiring no connection to high-voltage power lines would not be subject to the 10% cap. Nor would “distributed energy” facilities, the term referring to solar panels on residences, businesses and schools generating less than 1 megawatt.

The amendment further specifies energy developers are to create contiguous, unfenced wildlife corridors to allow animals to safely pass around the project site, add vegetative screening to shield the project from view, locate any noise-generating elements at least 750 feet from residential or commercial areas, and provide renderings of what the project would look like from neighboring sites and roads.

Susan Corvello of Claremont took the opposite position from Edwards and contended that allowing up to 10% of the county’s land for energy projects is “probably a little bit too much.”

Energy Right describes its mission as ensuring “energy is developed the right way with a focus on property rights and conservative ideals, including an all-of-the-above energy strategy led by a market-based approach.”

Specifically, Cox asked the Planning Commission to allow flexibility, rather than the fixed 750-foot radius from historic sites, and to redefine the term “project site” as only the fenced area where solar panels or other infrastructure would be located. Currently, the proposed amendment defines the term as the “entirety of the parcels on which an energy facility will be installed.”

The proposed amendment would also change the process for the approval of new energy projects. Currently, when new solar farms are proposed in Surry, their developers request a slate of approvals, including conditional use permits and a vote declaring the project “substantially in accord” with the Comprehensive Plan. The amendment proposes changing that process to a “mandatory pre-application meeting” to determine the project’s conformity with the plan ahead of any vote on the other slate of requested approvals.