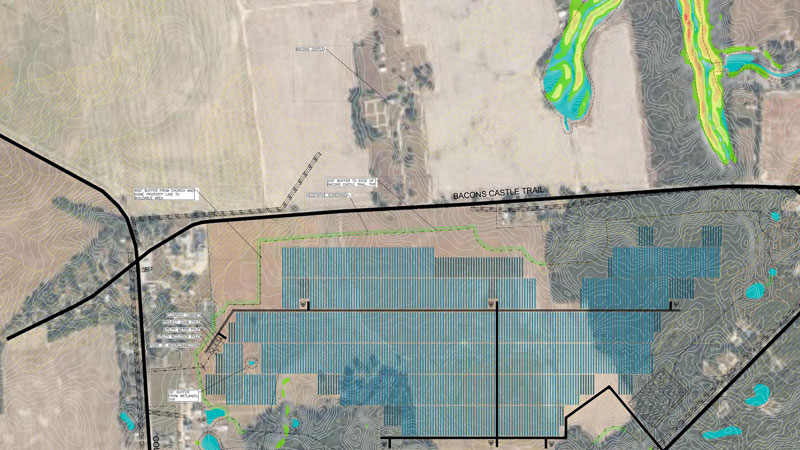 Surry County supervisors voted on Jan. 5 to officially reject a solar farm proposed for a 220-acre parcel across the street from the 17th century Bacon’s Castle homestead.

The supervisors had previously considered the project in June, when Supervisor Judy Lyttle made a motion to approve the project, but it received no second.

Pine Gate had requested a comprehensive plan amendment, conditional use permit, rezoning, siting agreement and a determination that the proposed solar farm was “substantially in accord” with the amended comprehensive plan. Pine Gate, according to Perkins, had written to the county on Dec. 5 asking that the proposed solar farm be placed back on the agenda this month for a formal vote.

Greg Davis, an attorney representing Pine Gate, contended at the Jan. 5 meeting that the Surry Solar Center is “a really good project that came before this board at a really bad time,” noting that the attempted vote in June had occurred two months after the board’s former vice chairman, Ronald Howell, resigned, and just prior to former Dendron District Supervisor Michael Drewry resigning in July.

Pine Gate had offered a $100,000 upfront payment to the county, contingent on the project’s approval, plus a revenue-sharing agreement authorized by Virginia’s General Assembly in 2020 that would pay $1,400 per megawatt per year in lieu of traditional machinery and tools taxes. The revenue-sharing agreement was projected to bring Surry an estimated $1.7 million over the project’s 40-year lifespan.

Pine Gate also estimated the project would bring Surry $800,000 in real estate taxes over 40 years, for a cumulative $2.6 million, compared to the $165,000 in taxes the land would bring over the same four decades were it to stay agricultural.

Davis contended the 196 acres that would contain solar panels are “poor soils and timberland,” and he urged supervisors to not think of the project as a “loss” of agricultural land. The remainder of the parcel, he said, would remain in agricultural use.

“This project will not impact Bacon’s Castle,” Davis said, noting Pine Gate’s proposed 260- to 400-foot setback from Bacon’s Castle Trail to the edge of the project, plus another 100 feet of vegetation that would include 8-foot trees.

Preservation Virginia, the nonprofit organization that owns and operates Bacon’s Castle, didn’t specifically object to Pine Gate’s plans in a February 2022 letter to the board, Davis noted. The letter rather referred Surry to Preservation Virginia’s “Siting Solar in Virginia” report, which contends solar energy development and historic preservation are “not mutually exclusive goals.”

The supervisors, however, voted 3-1 to uphold the county Planning Commission’s January 2022 recommendation that all five of Pine Gate’s requests be denied. Lyttle cast the dissenting vote and Supervisor Timothy Calhoun abstained because of his employment with Dominion Energy.