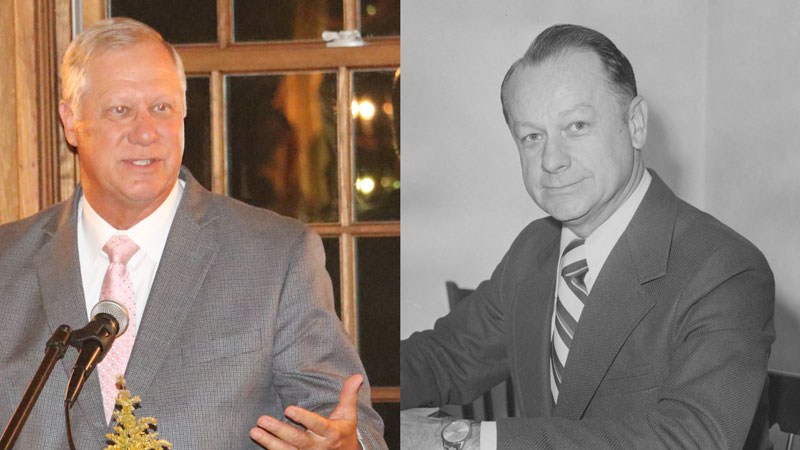 Left: Brian Hedgepeth delivers an acceptance speech on behalf of his late father, Isle of Wight County native George Horace “Top” Hedgepeth, during the sixth annual Franklin Community Wall of Excellence Induction Dinner and Ceremony that took place Oct. 22 at the Cypress Cove Country Club in Franklin. (Photo by Titus Mohler | The Smithfield Times.) Right: The late George Horace “Top” Hedgepeth, an Isle of Wight County native, was part of the sixth class of inductees onto the Franklin Community Wall of Excellence, receiving the honor due to his outstanding service.

The Franklin Community Wall of Excellence gained six new names via its 2022 class.

Among those being inducted onto the wall due to their outstanding service was the late George Horace “Top” Hedgepeth, a native of Isle of Wight County.

As noted in the event’s program, through the vision of some local Franklin City Public Schools alumni and school personnel, the Franklin Community Wall of Excellence Inc. was established in 2016 as a program to honor former Franklin and Hayden high school students, administrators, teachers and staff who have excelled or distinguished themselves through personal and/or professional success, as well as to recognize those community members who have made significant contributions to the public schools in Franklin.

“The Wall” is located at Franklin High School, adjacent to the gymnasium, a recent Wall of Excellence news release stated. Names and photos of each inductee are displayed for generations of Franklin High School students and community members to see as they walk by on their way to class or an event at FHS.

Jim Jervey introduced Hedgepeth briefly before calling up Brian Hedgepeth, one of Top’s sons, to accept the induction honor on his father’s behalf.

“As you all know, Top is no longer with us,” Jervey said. “We are very pleased and blessed to have his three boys with us tonight.”

Jervey said he asked all three sons numerous times where the nickname “Top” came from.

“And guess what? Nobody knows,” he said. “Coach Hedgepeth, he’s a cornerstone in Franklin. You can look at coaching little league, our YMCA, our hospital, our downtown. He was an extremely successful businessman.”

Jervey noted that Hedgepeth was a dedicated family man.

“So in saying that, I think ‘Top’ was given to him because of what he gave back to our community — put Franklin and Southampton area as one of the top places that you could ever live,” Jervey said.

Brian, the youngest of Top’s three sons, thanked everyone for coming to the induction ceremony, and he thanked the Franklin Community Wall of Excellence organization for recognizing all the inductees for 2022 and previous years.

“I’m honored tonight to be here and represent the Hedgepeth family in accepting my Dad’s induction into the Wall of Excellence,” he said.

He acknowledged family members present, including his brothers and their wives and his own wife and daughter.

He began talking about his father from his family’s perspective by noting that he was born in 1927 in the Colosse area of Isle of Wight County.

“His family made a living farming,” he said. “They were not a wealthy family. Along with that, he was born two years before the Great Depression, and life was somewhat difficult during his early childhood.

He said, “Dad graduated from Carrsville High School in the 11th grade, because that’s all the grades there were then.”

“At Carrsville High, he excelled at the sport,” he said. “After graduating, he accepted a scholarship to Randolph-Macon College to play baseball. He completed his freshman year, but he did not return for various reasons.

“Dad was very disappointed that he did not complete his college education,” Brian continued. “However, I think this was a driving force to make sure that all of his sons completed their education. And I promise you, he made sure we all went to college and we all got degrees.”

After returning from Randolph-Macon, Top enlisted in the U.S. Navy in 1945 during World War II.

“While he willingly enlisted to serve his country, he was fortunate that the war came to an end prior to being considered for action,” Brian said. “After being honorably discharged he returned home.”

He settled in the city of Franklin.

Brian noted that in 1946, his father began a long career with the St. Regis Paper Company.

“He was originally hired so that he could play baseball for the company team, but through the years, he did work hard, and he rose to various positions, such as shipping supervisor, industrial engineering quality control manager, training instructor and personnel manager,” Brian said.

“He did find time to meet a young lady in 1946 who he would marry the next year,” he continued. “That would be my mother, Louise.”

Brian said that what he would call his father’s legacy began in the late 1950s.

“Dad became a personnel manager at St. Regis and would serve in that capacity until 1974,” he said. “St. Regis was a very diverse employer. Dad worked closely with all the employees and managed relations with the union. He treated everyone with respect and kindness.

“During this time, Dad began his journey in community service, which included one of his favorite pastimes — baseball,” Brian continued. “Dad served as the coach for the St. Regis youth baseball team for many years. The team participated in the old YMCA league where he worked closely with 12- to 16-year-olds.

“He touched the lives of hundreds of young men, many of whom are approaching their mid-to-upper 70s today,” he said. “There’s rarely a week that goes by that I don’t run into someone who talks to me about Dad and what it meant to have him as his coach and how they influenced him.”

Brian said he and both of his brothers had the pleasure to play for their father.

“Unfortunately, because of the drafting process that took place in picking teams, all three of us actually played one year against my dad,” he said. “But if you can imagine, even when we were playing against him and his team, he was always our dad, and he was always our coach.”

Top played church softball for Franklin Baptist Church, where he attended and was well-known for his skills as a player.

“Aside from baseball and softball, Dad was involved in many organizations and lived by the motto, ‘Service above self,’” Brian said.

He noted that his dad served as the president for the local Franklin-Southampton Area Chamber of Commerce and chaired its industrial division. He was president of Franklin Lions Club. He was a group leader for the Southampton Memorial Hospital Building Fund in the early 1960s. He was on the board of directors for the Franklin Community Fund, which is what is the local United Way today.

“Dad was appointed to the Virginia Advisory Council to Review Workers’ Compensation Laws for the State of Virginia,” Brian said. “He was a member of the board of directors of the Franklin YMCA and a group leader for the YMCA Building Fund.”

Top also served in public office, being elected to the Franklin City Council and serving on it from 1966-78.

“Later in his career, Dad took a job at St. Regis in sales where he would work until his retirement in 1989,” Brian said. “He was very successful in his job in sales and received many honors for his performance, but his greatest honor with the company came in 1983 when he received the President’s Order of Merit Award recognizing his exceptional service and outstanding performance beyond the normal requirements of his job.”

Brian explained that St. Regis was a large organization back in that day, and Top was the first employee of his division to receive this award.

“Now that was my dad and his career in service to his community, but let me try to close this up and tell you what was important to my dad,” Brian said.

“First, the brief history I gave highlighted my dad’s firm belief in volunteering and giving back to his community,” he continued. “He demonstrated this throughout his lifetime. He did it willingly, and he did it unselfishly. He never looked for recognition or rewards. He cared for his community, and he did what he could do to make it a better place.”

Next, Brian expanded on the subject of his father’s love of baseball, noting that he loved playing and watching it.

“He loved following his sons to every game they played, from the time they started when they were 8 years old until they were unable to satisfy their own love for the game,” Brian said. “That was not just baseball. If his family was playing, he didn’t care what sport it was, and he continued to love following his grandchildren and either watching them play or hearing about their games.”

Then Brian highlighted his father’s love for Louise, his wife.

Top died July 1, 2021, and Brian said, “Two months prior to his death, Mom and Dad celebrated their 74th wedding anniversary. To me, that defines Dad’s life as much as anything. He loved our mother. They were inseparable.”

Brian noted that they were great parents who sacrificed everything for their children.

“We never went without, and we learned about family, hard work and community service,” he said.

Brian said his mother is still living but could not be at the ceremony. He noted she was pleased to know Top was being honored, though.

“Finally, Dad loved his church and his God,” Brian said. “Dad was a very religious man. He showed that love by serving his church. He taught Sunday school, was president of Men’s Bruner Bible Class, and he chaired the board of deacons. He worked on numerous building and fundraising campaigns, (and) he chaired the nominating committee for years.”

Brian said, “He prayed regularly, and he died happily, looking forward to going to heaven. So that’s our dad. He loved God, he loved his family, he loved his wife, he loved serving others, and he loved baseball. He enjoyed his life.”

In conclusion, Brian said, “We, as family, are all better people for knowing him, and I’d like to think that our community was better because of him. On behalf of our entire family, thanks again for honoring our Dad tonight, and congratulations to all the other inductees.”