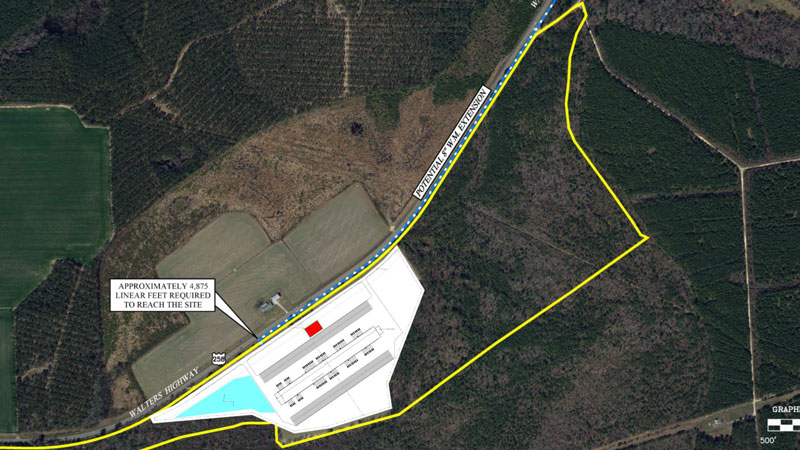 "Project Air Station," a codename for a proposed distribution center looking to set up along Walters Highway, is looking to install its own well and septic field rather than tap into the town of Windsor's water main, 4,800 feet away. (Image courtesy of Isle of Wight County)

Isle of Wight County’s Economic Development Authority has asked the Board of Supervisors to repeal a requirement that businesses seeking to develop in Phase III of the Shirley T. Holland Intermodal Park connect to public water and sewer.

According to Economic Development Director Chris Morello, the requirement stems from proffered conditions the supervisors imposed in 2013 when rezoning the 969-acre Phase III as “conditional limited industrial.”

Phases I and II of the 1,200-plus-acre park, located just outside the incorporated borders of the town of Windsor, are home to distribution centers for Keurig Dr. Pepper, Safco Products Co. and Cost Plus World Market, which collectively employ over 800 people.

A 2013 master plan for Phase III had called for at least eight additional warehouses totaling 4.6 million square feet, and a 1 million gallon water tower that would draw from the town of Windsor’s supply.

In 2019, when the county attempted to lure a Virginia Department of Juvenile Justice correctional center to a parcel bordering Walters Highway, an environmental study determined much of Phase III to be wetlands due to the presence of loblolly pines, a tree the Army Corps of Engineers reclassified as a wetland plant in 2012. According to a map Morello shared at the supervisors’ Jan. 5 meeting, only 150 acres remain classified as “uplands,” or non-wetlands suitable for development.

The EDA’s request to rescind the public water and sewer requirement for Phase III pertains to discussions with an unnamed potential purchaser code-named “Project Air Station,” according to a Dec. 21 letter to the supervisors from EDA Board of Directors Chairman Carroll Keen Jr.

Project Air Station proposes to buy 135 acres, including the 34.7-acre uplands parcel slated to house the juvenile justice facility and a second facility code-named “Project Bolt,” which in 2019 was revealed as a proposal by Windsor-based Community Electric Cooperative to move its headquarters outside the town’s limits. The juvenile justice facility plans came to an abrupt end on April 18, 2019, when Supervisor William McCarty cast the deciding vote to back out of the county-state negotiations amid significant opposition to the project from Windsor-area residents.

According to Keen’s letter, the nearest tappable water line is at Curve Drive within Windsor’s town limits, over 4,800 linear feet from the proposed distribution center site. The nearest sewer tap is a Hampton Roads Sanitation District main at Route 460, roughly 10,000 linear feet away. Instead, Project Air Station proposes to drill its own well, erect an on-site water tower and use an on-site septic field for sewer service.

The letter asks that the water and sewer requirements be rescinded “in recognition of far less density and water consumption potential than the master planned developments contemplated a decade ago.”

The supervisors are slated to vote on the EDA’s request on Jan. 19.

Editor’s note: This story has been updated to correct the date of the vote to Jan. 19.