School Board declines to adopt code of ethics, protocols 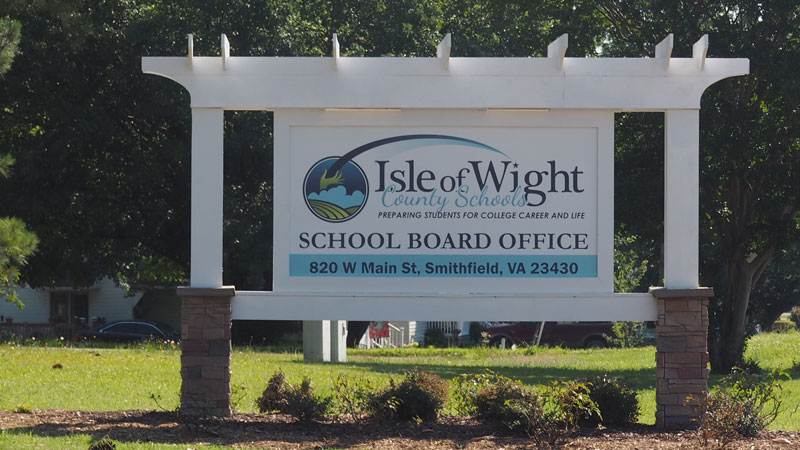 Isle of Wight County’s School Board declined to approve a code of ethics or board protocols for 2023 at its Jan. 12 reorganizational meeting.

Chairman John Collick, who succeeds 2022 Chairwoman Denise Tynes, called for a motion to adopt the code of ethics, but none was made. Then a motion by board member Michael Cunningham and seconded by Tynes to readopt the board’s protocols failed when Collick and newly elected members Jason Maresh and Mark Wooster voted “nay.”

Collick then called again for a motion on the code of ethics, which Tynes made and Cunningham seconded, but that too failed when Collick, Maresh and Wooster voted “nay.”

According to Tynes, the votes mark the first time since the code of ethics was drafted in 2009 that the document hasn’t been readopted annually.

Collick then made a motion to replace 22 existing board policies with a series of bylaws he’d drafted, and Maresh seconded it, but Collick later rescinded his motion pending further discussion of the bylaws document at a later meeting. According to Cunningham, board members received Collick’s 14-page document just two days prior, on Jan. 10.

The draft bylaws document wasn’t included as an attachment to the meeting’s agenda, but The Smithfield Times obtained a copy from school officials.

The document calls for the board clerk, who reports to the board and the superintendent under existing School Board policy, to instead report “directly to the chair.”

Policy BCC currently states the clerk and deputy clerk are to discharge their duties “under the general supervision of the superintendent,” though Isle of Wight County Schools’ organizational flowchart lists the clerk as reporting to the School Board.

“The positions have never been stand alone positions, meaning they serve in other roles in the division,” IWCS spokeswoman Lynn Briggs explained. “For example, the current clerk is also an administrative associate in the instructional department. The deputy clerk is with HR (Human Resources). We are not sure how the proposal would impact current staff and their responsibilities, but look forward to discussing this further with the board during the upcoming work session.”

Another change from existing board policies would move public comments on agenda items to the beginning of each meeting’s open session at 6 p.m. Per the draft, agenda-item comments would occur immediately after the chair’s welcome and recitation of the Pledge of Allegiance, and any comments on non-agenda items would follow recognition of students as “Isle of Wight Achievers” and any special presentation.

Currently, comments on non-agenda items are only permitted at the end of each meeting after the board’s scheduled business has concluded. The current policy dates to 2021, when the board rescinded a previous policy that had allowed comments on any matter at the start of each meeting but capped the total time allotted for comments at 30 minutes.

The 30-minute public comment cap had come under fire in 2021 from critics of the school system’s equity and inclusion initiatives who would frequently use and sometimes exceed the allotted time to argue the initiatives were tied to Critical Race Theory, an academic discipline that contends American laws and institutions have perpetuated inequalities among minorities.

Collick, Maresh and Wooster each campaigned for their respective seats in 2021 and 2022 on platforms of opposition to CRT, as it’s often abbreviated. Gov. Glenn Youngkin, who also campaigned on opposition to CRT in 2021, signed an executive order in 2022 mandating an end to “inherently divisive concepts, including Critical Race Theory” in public schools.

Another new policy included in Collick’s draft bylaws states that the School Board “shall not waive any bylaw” and “shall not waive any policy” without having a “majority vote at two consecutive meetings.” The chair would then be required to write a “written justification” for the waiving of the policy and to post that statement to Isle of Wight County Schools’ website within seven days of the vote.

The proposed additions would effectively bar the School Board from following through on its 2022 vote to rename Smithfield High School’s career and technical education building for retired Superintendent Jim Thornton. School Board attorney Pakapon “Pak” Phinyowattanachip told the board in December that it had relied on an “incorrect version” of one of its policies when voting to rename the building.

A March 2015 version of School Board Policy FFA, which states “no school will be named for a living individual,” had been slated for reauthorization at the board’s Dec. 8 meeting. According to School Board records, however, the board had revoted on June 11, 2015, on a different Policy FFA version that added the words “or school facility” to the prohibition. The board plans to vote in February on reauthorizing the June 2015 version.

Another change Collick’s draft bylaws propose states “neither the superintendent nor his staff is authorized to hold any meeting for the general public, without the express, prior approval of the School Board.”

Editor’s note: This story has been updated.