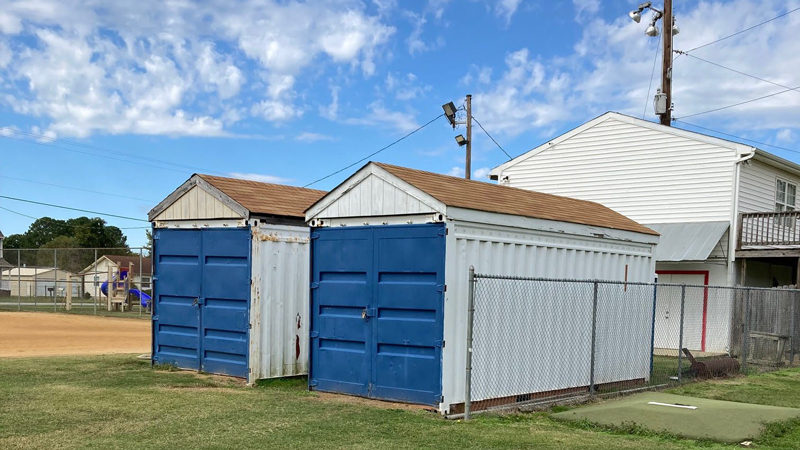 Two shipping containers have been converted to storage sheds at Beale Park in Smithfield. (Photo courtesy of Town of Smithfield)

Smithfield’s Planning Commission will wait until at least March to vote on a proposed zoning ordinance change that would allow shipping containers as permanent structures in limited areas.

Sections 15 and 16 of the zoning ordinance’s Article 2, Chapter P, currently allow shipping containers only as temporary structures, permitting them for a maximum of 60 days with a waiver, and up to an additional 90 days with a zoning permit.

In November, town staff proposed adding Section 17, which would make permanent shipping containers a by-right use in areas zoned for heavy industry (I-2), meaning owners of I-2-zoned parcels would be allowed to place shipping containers on their property without needing town approval.

They would also be permitted by special use permit in light industrial (I-1) zoning, farmlands zoned for community conservation (CC) and in the town’s highway retail commercial district (HRC). Obtaining a special use permit would entail an applicant making his or her case to the Planning Commission.

The debate over shipping containers dates to June, when a family requested – but was denied – permission to keep a container at their Jericho Road residence and convert the corrugated metal structure into a storage shed.

The Planning Commission’s Jan. 10 public hearing on the proposed changes drew only one speaker, Bob Hines of Washington Street, who asked how the changes would affect two shipping containers at the Smithfield Recreation Association’s Beale Park, which have been given roofs and converted to storage sheds. According to Commissioner Randy Pack, who also serves on the Town Council as its liaison to the Planning Commission, the Beale Park sheds were formally permitted as accessory buildings some years ago and would therefore be unaffected by the change.

Pack then asked that the commissioners consider adding a 21-day exception to the ordinance to allow residents to rent moving pods without needing to go to the Planning Commission for a zoning waiver. Most people, he argued, are likely unfamiliar with the existing 60-day waiver requirement.

The goal, he said, was to “apply a little common sense to what we do,” Pack said.

But according to town staff, Pack’s requested change would entail modifying Section 15, and therefore would need to go through the same public hearing process the proposed Section 17 went through.

Town Councilman Jeff Brooks, whom Chairman Charles Bryan gave permission to speak on the matter at the end of the meeting, proposed another solution for making it easier to rent moving pods without needing to go through the Planning Commission.

Brooks owns a Virginia Beach-based moving company, which he said holds a series of permits from the city that are affixed to the containers it rents out. This way, the company, not the customer, is the only entity that has to appear before the Planning Commission.

“It’s a whole lot more simple in Chesapeake, Norfolk, the bigger cities. … It keeps the customer completely out of it,” Brooks said.

The commissioners voted unanimously to table the proposed Section 17 until March, when there would be a public hearing on Pack’s proposed changes to Section 15. In the event the planners recommend approval of the changes to each section of the ordinance, the two sections would then be presented as a package to the Town Council for final approval.