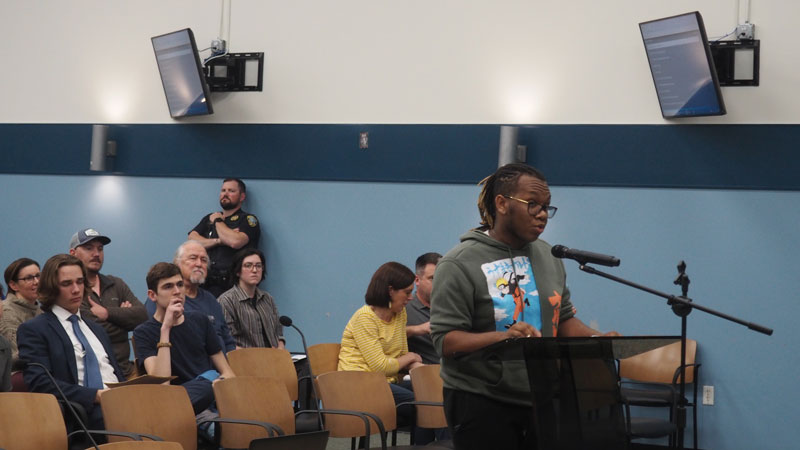 Isle of Wight County’s School Board postponed voting on a proposed policy that would ban “inherently divisive” content from its curriculum following fierce opposition at the board’s Jan. 12 meeting from students and teachers who condemned the move as “censorship.”

In December, newly elected School Board member Mark Wooster proposed what he termed a “more comprehensive” version of a state-mandated policy intended to allow parents to opt their children out of “sexually explicit” instructional materials.

The Virginia General Assembly passed legislation in 2022 requiring school boards to adopt policies by Jan. 1 that are “consistent with” or “more comprehensive than” new Virginia Department of Education model policies, which require schools to provide at least 30 days’ notice ahead of using any sexually explicit materials. The law defines “sexually explicit” to mean any “lewd exhibition of nudity,” or any image or description of “sexual excitement, sexual conduct, sadomasochistic abuse, coprophilia, urophilia, bestiality or fetishism.”

The School board had voted in November, before Wooster took office, to incorporate the model policy language into an existing policy designated IIA. Wooster’s proposed changes would make the policy apply not only to sexually explicit materials but content deemed “inherently divisive.” Wooster’s draft proposes going beyond informing parents and states that learning materials falling under either category would be “prohibited from use” in student curriculum.

Wooster and newly elected School Board member Jason Maresh, both of whom won their seats in the Nov. 8 election, had campaigned for their positions on opposition to “divisive” and “sexually explicit” learning materials. In 2021, a group of county residents – Maresh among them – began accusing School Board members and school administrators of using equity and inclusion efforts to promote tenets of Critical Race Theory, which argues laws and institutions have perpetuated inequalities among minorities. Maresh took specific issue with Smithfield High School’s “Read Woke” challenge, contending in a 2021 letter that the social justice-themed books available at the school’s library “disparage white people as privileged, inherently racist, oppressors.” Other parents, in 2021, had argued the books’ use of profanity and depictions of sex – and in some cases, rape – was inappropriate for teenagers.

Luann Scott, who retired in 2021 as one of Windsor High School’s longest-serving English teachers, told the School Board she’d been stunned 30 years ago when a parent complaining about her teaching a book by the late civil rights activist and poet Maya Angelou had remarked to her that she was “tired” of her daughter “reading about Black people.”

“To think that we are here tonight looking at the exact same issue,” Scott said, calling Wooster’s proposal “more political than educational.”

Eight speakers described the proposal as “censorship,” including Scott and 2021 Windsor High School graduate Leah Carroll, who now attends the University of Virginia.

Carroll, who served as Windsor High’s student liaison to the School Board for two years, said she was “very concerned about the direction the School Board has taken” since she graduated, and told board members that her advocacy in matters of equity and inclusion at Windsor High had played no small role in her receiving UVA’s full-ride Jefferson Scholarship.

“If you are so concerned white students would feel guilt over learning about the history of their ancestors, I would encourage you to wonder what environment you are cultivating that would cause them to identify more with white slave owners than with white abolitionists,” Carroll said.

Grace Chatham, a senior at Smithfield High School, contended students would “not be allowed to learn about the civil rights movement, the Holocaust or even the women’s rights movement, as it would paint – to quote the policy – an individual by virtue of his or her race, skin color, ethnicity, sex or faith, as racist, sexist, or oppressive, whether consciously or subconsciously.”

The College Board, which functions as the overseeing organization for advanced-placement high school courses that carry college credit, has stated on its website that if schools censor required topics from their AP courses, the board will remove the AP designation from that course and its inclusion in the AP course ledger provided to colleges and universities.

Between Chatham, who is taking four AP courses this semester, and her twin sister, who is taking three, the family “would be out $672 that we paid under the impression that I would gain credits toward my college diploma,” Chatham said, noting each test costs $96.

Other speakers urged the board to stay the course on Wooster’s proposed policy, despite the opposition.

“Two of you made it clear you supported this policy when you ran for election in November 2022,” said Carrsville-area resident Volpe Boykin. “One of you made it clear that you supported a policy of this type when you ran for election in 2021. … You won the elections, not by a small majority, but by a large majority. The large majority that voted for you because of your positions deserves, and you have a duty, to follow what you promised.”

The third supporter Boykin references is John Collick, who ran on a platform of opposition to Critical Race Theory in 2021, and was elected chairman of the board at the start of the Jan. 12 meeting.

“No one here is interested in censorship; there’s not a single conservative who would ever want to suppress what people can read or what they can say,” said parent Laura Fletcher. “We’re asking for consideration in what our children are exposed to and how that exposure happens.”

Board member Denise Tynes, who’d spoken in opposition to Wooster’s proposal in December, said there was “no way” she could vote to approve the proposed policy as written.

Wooster, however, said the majority of the 21 emails he’d received pertaining to his Policy IIA draft were in support of the proposal as written.

The potential impact on the school system’s advanced-placement classes “is not, or was it ever, the intent of the policy,” Wooster said, noting he was open to “modifying the language.”

“What I will not deviate on is the commitment I made to the citizens who elected me,” Wooster said.

Maresh then contended the roughly 68.5% of Windsor-area voters who cast their ballots for him in November “voted for me because I promised to clean up and get rid of sexually explicit and inherently divisive social justice ideologies.”

The goal, he said, is to “get rid of” material that “falls into the category” of “pornography.”

“And it’s out there in some books,” Maresh said. “At the end of the day, if you’re not 18 years old, you’re a minor, so I will not condone providing anything to a minor that falls within the definition of pornography, end of story.”

Board member Michael Cunningham added that there were already filters installed on school-issued iPads and other electronic devices to filter content by age-appropriateness.

Collick then noted the intent of the proposed policy “was not to remove any of the classics,” but rather to “make sure” that “nobody ever introduces” graphic or sexual books into Isle of Wight’s schools.

“We know they have them in other cities around here,” he said.

Collick then pledged that the board would not do anything to jeopardize the advanced-placement program “for any student in this county.”

The School Board voted unanimously to postpone taking action on Wooster’s proposed policy until further discussing it at a Jan. 19 work session.