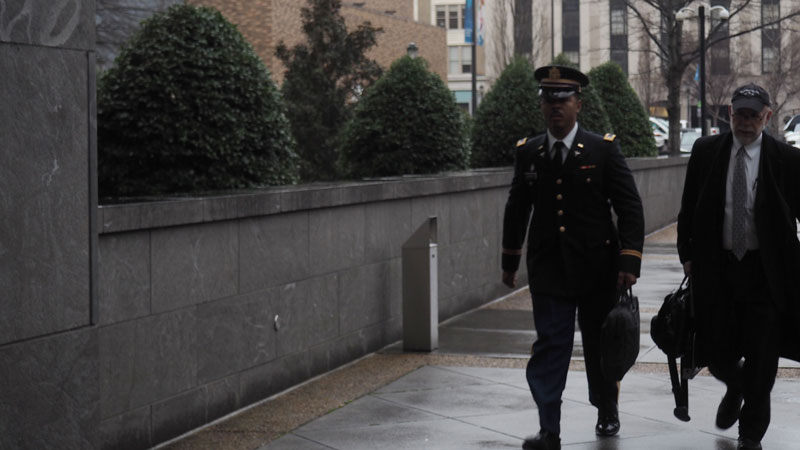 Editor’s note: This story has been updated to correct that the jury awarded Nazario $1,000 in punitive damages for Crocker’s illegal search.

A former Windsor police officer is liable for assault — but not battery — of a Virginia National Guardsman during a December 2020 traffic stop that later went viral on social media and sparked accusations of racially motivated brutality.

After two days of deliberations, a U.S. District Court jury in Richmond ruled unanimously in awarding $2,685 in damages to 1st Lt. Caron Nazario for his treatment by ex-officer Joe Gutierrez, who was fired over the incident. Daniel Crocker, another officer named in Nazario’s civil suit, was largely cleared by jurors.

The judge in the case had previously ruled that Nazario’s vehicle was illegally searched. The jury awarded no actual damages for that violation, but imposed $1,000 in punitive damages.

Nazario had sought $1 million in damages.

After a week of testimony, jury deliberations began shortly after 1 p.m. Friday, Jan. 13, were suspended for the holiday weekend and resumed Tuesday morning, Jan. 17. The verdict was rendered at about 3 p.m. Tuesday.

Nazario, who is of Black and Latino descent, had accused the two white officers of “false imprisonment” and “assault and battery” for having held him at gunpoint while shouting conflicting commands at him to keep his hands out of his car’s window and exit the vehicle. Video footage of the incident recorded on Nazario’s cellphone and by the officers body-worn cameras culminates with Gutierrez repeatedly pepper-spraying Nazario and using knee-strikes to force the lieutenant out of the car and onto the ground.

Nazario had testified during the trial that he’d been looking for a well-lit area to pull over, though attorneys for Crocker and Gutierrez noted he’d passed several businesses with lighted parking lots before stopping at the gas station.

The footage records Nazario repeatedly ask the officers “What’s going on?” and Gutierrez at one point answer that Nazario was “fixin’ to ride the lightning.” Nazario’s lawsuit contended the phrase was a colloquial reference to an execution, but Gutierrez, in a video deposition, contended he’d been referring to a taser. Nazario had also told the officers he was “honestly afraid to get out,” to which Gutierrez had responded, “You should be.”

Nazario’s attorney, Jonathan Arthur, said that despite the $3,685 award – which amounted to considerably less than the $1 million Nazario’s lawsuit had sought – he was still pleased that the jury had sent a message that certain actions by law enforcement will “not be tolerated.”

“We believe the jury made the correct decision,” said attorney Anne Lahren, who represented Crocker. “In light of the current climate, that took a lot of courage.”

Gutierrez had stated in the video footage that when he observes drivers wait for a well-lit area to pull over, “80% of the time, it’s a minority,” given “what the media’s spewing with the race relations between minorities and law enforcement.”

Nazario’s sister, Cameren, who is herself an officer with the New York Police Department, told The Smithfield Times by phone that she was “disgusted” with the verdict.

“I know that my brother did not receive true justice,” Cameren Nazario said.

“Justice did not prevail,” Randleman said, though he noted the NAACP would “respect the jury’s decision.”

Randleman said the NAACP would continue to push for a federal civil rights investigation into Gutierrez’s and Crocker’s actions. Hampton Commonwealth’s Attorney Anton Bell, who’d been named a special prosecutor, declined to press criminal charges against either officer last year after reviewing a Virginia State Police investigation of the incident, but asked in his written opinion that the U.S. Attorney’s Office for the Eastern District of Virginia open an investigation into whether Gutierrez’s actions violated Nazario’s civil rights.

Randleman noted the NAACP would continue to watch with interest as a state-level lawsuit brought by Virginia’s Office of the Attorney General against the town of Windsor makes its way through the Isle of Wight Circuit Court.

The lawsuit alleges an “unlawful pattern” of conduct by Windsor’s Police Department and is the first of its kind under a 2021 state law intended to stop systemic civil rights violations by law enforcement.