Smithsonian photographer Jim DiLoreto and curator Doug Owsley peer into a two-foot-deep hole next to the gravesite of Anne Randall, who died in 1696 and is interred at St. Luke's Church. (Photos by Stephen Faleski | The Smithfield Times) 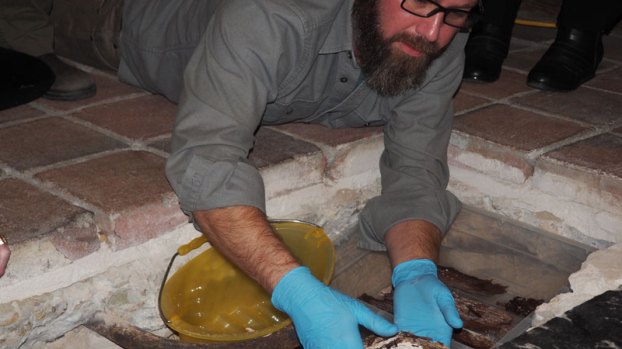 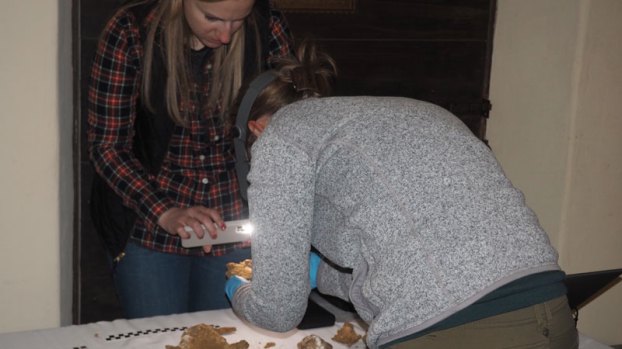 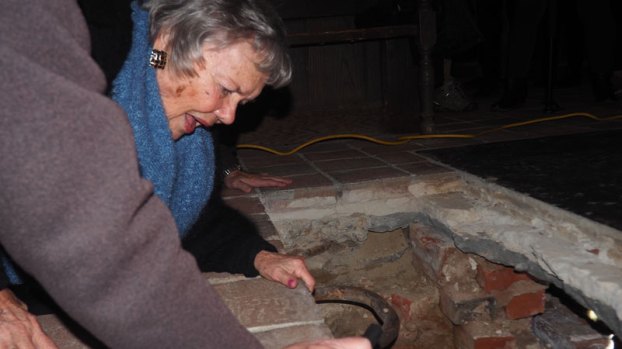 Bridger Family Association President Jean Tomes peers into a hole next to the gravesite of Anne Randall.

One is engraved with the circa-1686 epitaph “Sacred to the memory of the Hon. Joseph Bridger Esq., councel (sic) of state in Virginia to King Charles.” The other, dated 1696, reads, “Here lyeth the Body of Anne Randall.”

Elaine Powell, a 12th generation descendant of Bridger, is now hoping the Smithsonian Institution can help shed some light on a nearly 130-year-old mystery.

What actually happened to her ancestor’s bones?

When Smithsonian personnel worked with the Bridger Family Association in 2007 to exhume and study Bridger’s remains, they found only the top of his skull, his jaw and a few other bones. The remaining 80% of Bridger’s remains weren’t three miles away at his former White Marsh plantation, where he’d originally been interred.

Doug Owsley, a Smithsonian curator, believes the remaining bones may have been mistakenly interred with Randall, who, according to Powell, was an aunt of Bridger’s wife, Hester Pitt. Owsley’s theory is that gravediggers may have mixed up Bridger’s and Randall’s bones in 1894 while hastily relocating the two gravesites following a storm that damaged the church.

This week, Smithsonian representatives and Bridger family descendants arrived at St. Luke’s to put Owsley’s theory to the test by exhuming Randall’s gravesite. Shortly after 10 a.m. on Jan. 23, the Smithsonian personnel lifted a sheet of plywood to reveal a 2-foot-deep hole adjacent to Randall’s gravestone.

“Our hope and prayers are that the remains of Joseph Bridger will be, along with Anne Randall’s remains, under that wood right there,” Powell said.

Smithsonian excavators, Owsley explained, had dug sideways through the brick vault beneath the basalt slab to avoid having to lift the stone and risking it breaking. Inside, Owsley and his team found wooden fragments he believes to be from Randall’s original coffin – and a piece of Randall’s skull known as the cranial vault.

Since Bridger’s cranial vault had been among the pieces exhumed in 2007, “we know that it’s going to be hers,” Owlsey said.

Archeologist Matt Tuttle and an assistant spent the next several minutes extracting the fragments of bone and wood.

Karin Bruwelheide, a biological anthropologist with the Smithsonian’s National Museum of Natural History, began examining some of the larger bone fragments on site. The fragments, she said, are consistent with an older woman.

“We have a hard time seeing things right now because they’re so fragile and there’s a lot of dirt,” Bruwelheide said.

One piece, she noted, appeared to be merged with a scrap of paper – possibly newsprint. She speculated that when the remains were exhumed and reburied in 1894, the coffin may have been lined with newspaper.

Owsley said based on what the team had exhumed so far, he was only seeing one person’s remains – not two as he’d originally theorized. But even if only Randall’s remains are recovered, and the whereabouts of Bridger’s bones remains a mystery, Owsley said he’d still be “very excited” about the insight the dig will give into high-status women in 17th century Isle of Wight County.

Bridger was also a close ally of then-Gov. Sir William Berkeley, and played a prominent role in quashing the 1676 uprising known as Bacon’s Rebellion.

Nathaniel Bacon, according to the National Park Service’s website, was resentful of Berkeley’s denying him a commission as leader of the local militia and had led unauthorized raids against several Native American tribes. During the uprising, Bacon and his supporters burned Jamestown and occupied the homestead of Arthur Allen in neighboring Surry County for four months, resulting in the Jacobean-style brick home now being known as Bacon’s Castle.

Bacon died of bloody lice on Oct. 26, 1676, and the rebellion soon after failed for lack of a new leader. Bridger died 10 years later at age 58 from “dry gripes” – a Colonial-era term for heavy metal poisoning from lead-based dinnerware.

‘A woman of remarkable means’

Randall, however, wasn’t even known to be related to Bridger as of the 2007 exhumation, according to Powell. Randall, she noted, had married four times but produced no children.

“We don’t know her maiden surname, but she was married to a Pitt at one time,” Powell said.

She at one point became a ward living under Bridger’s roof at his White Marsh plantation. There’s no “clear evidence” to support Powell’s contention that Randall was Bridger’s aunt-in-law, Ballance said.

Now that Randall’s body has been exhumed, “we hope that through some DNA analysis of her bones … we can find out how she perhaps is related,” Ballance said.

That Randall was buried beneath a basalt slab – originally intended for Bridger’s wife, Hester, according to Powell – is itself unusual, Ballance said.

The popularity of this style of tombstone, Ballance said, existed in the English tradition for only about 80 years, starting around the 1680s. That her family would have purchased the stone from England, likely had it carved in England, and then brought overseas to Virginia, indicates she was a “woman of remarkable means.”

“For a woman, period, it’s a rarity,” Ballance said.

That any of her remains survived the highly acidic soil of the Chesapeake and Tidewater region is “also extremely remarkable,” he said.

This week’s exhumation is the result of months of behind-the-scenes work on the part of St. Luke’s, the Bridger family and the Smithsonian.

In December, St. Luke’s published public notices throughout the month in The Smithfield Times that the church was seeking a Virginia Department of Historic Resources permit to conduct archeological investigations involving the removal and re-interment of human remains.

“We had to make sure that there were no concerns or apprehensions about exhuming these remains,” Ballance said.

The church also had to secure permitting by the Department of Historic Resources’ cemetery division and historic easement division, since a portion of the church property is protected under a state easement, as well as written endorsement from the Bridger Family Association and the endorsement of Isle of Wight County.