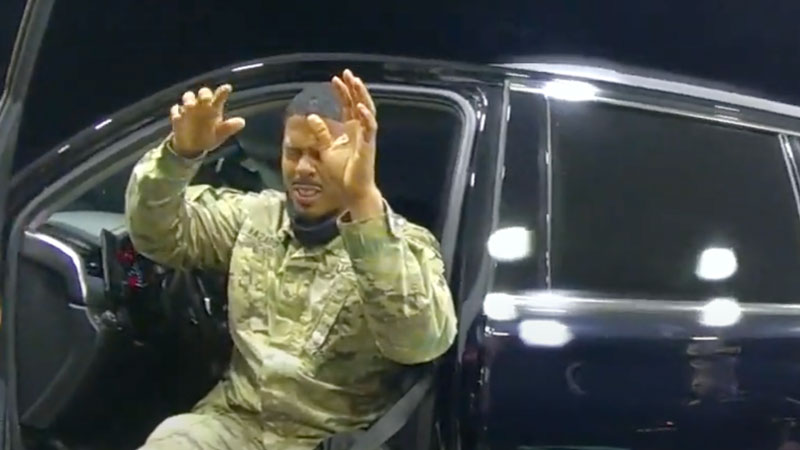 Virginia National Guard 1st Lt. Caron Nazario, after being pepper-sprayed, exits his car with his hands raised in this still image taken from body camera footage of the Dec. 5, 2020, traffic stop in Windsor.

On Jan. 20, attorney Jonathan Arthur, who represented Nazario in the five-day trial alongside co-counsel Thomas Roberts, filed a post-trial motion asking the court for “judgment notwithstanding” the verdict, or in the alternative, “a new trial on the merits on all claims,” excluding the assault and illegal search.

According to the American Bar Association, a motion for judgment notwithstanding a verdict asks the judge to rule for the losing party despite the decision of the jury.

A nine-member jury issued a unanimous verdict on Jan. 17 after two days of deliberations, finding ex-officer Joe Gutierrez liable for assault – but not battery – during a Dec. 5, 2020, traffic stop that saw Gutierrez hold Nazario at gunpoint, repeatedly pepper-spray him, and use knee-strikes to force the guardsman from his car. Video footage of the stop went viral in 2021 on social media and led to Gutierrez’s firing.

Though Nazario technically won on his assault claim, the jury ordered Gutierrez to pay only $2,685. The jury then ordered Officer Daniel Crocker, who had been the one to initiate the traffic stop and who remains on the force, to pay $1,000 in punitive damages for illegally searching Nazario’s car and briefly removing a firearm from the vehicle after Nazario was handcuffed.

Nazario, who is of Black and Latino descent, filed the federal lawsuit in 2021, seeking $1 million in damages and accusing the two white officers of racially motivated brutality. On Jan. 13, the final day of testimony, Arthur had upped the request to $1.5 million.

According to Arthur, under “certain circumstances” the court can order a new trial. The appeal process, he said, would focus predominantly on “things that occurred prior to the trial that had a large impact on the trial itself.”

Arthur’s brief in support of his request cites federal rule of civil procedure No. 50, which allows for the court to enter its own judgment for a plaintiff when “the evidence favoring the claimant is so one-sided” that “the jury is not at liberty to disbelieve,” and rule No. 59, which allows for the court to order a new trial in the event of “inadequate damages,” misconduct by one party or the jury, or a verdict “contrary to law.”

Arthur includes in his filing a signed affidavit by Raquel Welch, bureau chief of the New York State Department of Corrections, who contends she observed the juror who became the jury’s foreman “sleeping with his eyes shut” on “multiple occasions” when she attended the trial on Jan. 9 and Jan. 10. Nazario’s girlfriend, Sadie Madu, who testified at the trial, signed an affidavit stating the same, as did Yolold Owes, a retiree of the New York City Transit Authority.

“A motion for a new trial seeks an extraordinary remedy reserved by the courts for exceptional circumstances which are not present here,” Lahren said. “Caron Nazario is unhappy with the jury’s verdict and seeks to blame the trial itself rather than the merits, or lack thereof, of his own claims. We firmly believe that the jury got it right with its verdict. (U.S. District Court Judge Roderick Young) presided over the trial in strict adherence to the Federal Rules and any claims to the contrary by Mr. Nazario are unfounded. We expect that Mr. Nazario’s motion for a new trial will be denied.”

Gutierrez’s attorneys, Coreen Silverman and Jessica Swauger, did not respond to a request for comments by deadline.

The viral video footage showed Nazario repeatedly asking the officers “What’s going on?” as they shouted conflicting commands at him to keep his hands out of his car’s window and exit the vehicle. Gutierrez at one point answers Nazario by telling him he was “fixin’ to ride the lightning.” Nazario’s lawyers contended the phrase was a colloquial reference to an execution, but Gutierrez, in a video deposition, contended he’d been referring to a taser. Nazario also told the officers he was “honestly afraid to get out,” to which Gutierrez responded, “You should be.”

Young ruled in 2022 that the officers were protected by the federal doctrine of qualified immunity, which shields law enforcement from misconduct lawsuits, and dismissed Nazario’s allegations that the officers had “unreasonably prolonged” the traffic stop, used “excessive force” and infringed on Nazario’s free speech right by offering him the option of avoiding charges, and not having his military superiors informed, if he would “let this go.”

Young, however, ruled Crocker’s removal of Nazario’s firearm constituted an illegal search. The jury, which included one Black member, was tasked with deciding whether either officer’s actions constituted Nazario’s state-level claims of “false imprisonment” or “assault and battery,” and whether Gutierrez bore any liability for Crocker’s search.

Crocker had pulled Nazario over for allegedly lacking a rear license plate. Gutierrez responded to the scene when Crocker reported a “felony traffic stop” to dispatchers.

Nazario had a temporary, expired New York plate taped to the inside of his car’s rear window. Crocker said he didn’t see it and accused the lieutenant of eluding police for having driven roughly a mile down Route 460 to a BP gas station before stopping.

Nazario testified during the trial that he’d been looking for a well-lit area to pull over, though attorneys for Crocker and Gutierrez noted he’d passed several businesses with lighted parking lots. Gutierrez stated in the video footage that when he observes drivers waiting for a well-lit area to pull over, “80% of the time, it’s a minority,” given “what the media’s spewing with the race relations between minorities and law enforcement.”