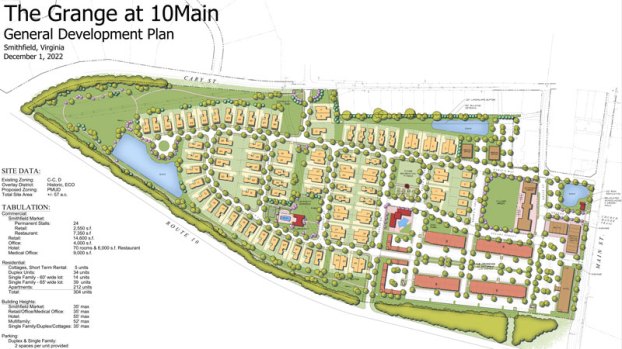 Joseph W. Luter IV has submitted this updated rendering of the proposed "Grange at 10Main" development. (Images courtesy of Town of Smithfield) 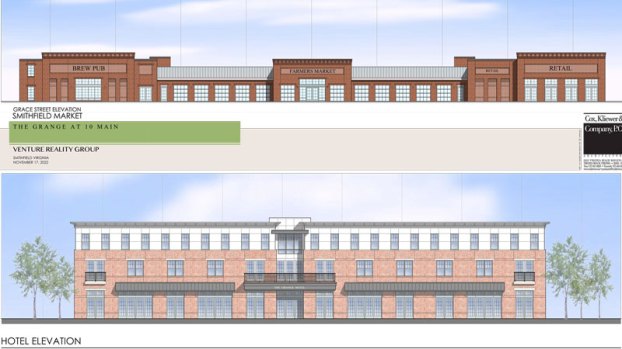 A rendering shows the architectural style proposed for the market and hotel. 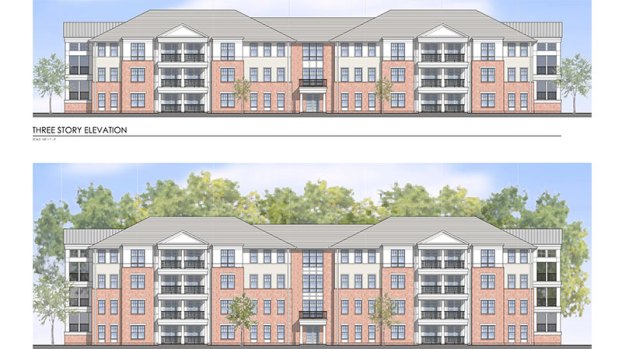 A rendering shows the style of the proposed three- and four-story apartment buildings.

This rendering shows one of the proposed style of detached houses slated for The Grange.

This rendering shows another proposed style of detached house proposed for The Grange.

Joseph Luter IV, son of former Smithfield Foods Chairman Joseph Luter III, has filed an official application with the town of Smithfield seeking mixed-use zoning for his father’s “Grange at 10Main” development, named for its proposed location at Route 10 and Main Street.

The elder Luter had purchased and razed the former Little’s Supermarket and 1730s-era Pierceville farm in 2020, proposing in 2021 to turn the nearly 57 acres at the western edge of Smithfield’s historic district into a development consisting of a permanent home for the town’s farmers market, a hotel, three- and four-story apartment buildings, single-family and duplex homes and commercial space.

Luter IV’s application asks that the land be rezoned as “PMUD,” an acronym for the “planned mixed-use development” option Smithfield’s Town Council voted in 2022 to add to its zoning ordinance. In addition to rezoning, the application requests six special use permits.

The first would allow multifamily buildings as a component of the mixed-use development.

The third would waive the town’s maximum building height of 35 feet to allow the apartments and hotel to go up to 55 feet, or four stories.

The fourth would waive yard setback requirements to allow residential and commercial structures to be built closer to the sidewalk.

The fifth would waive the town’s requirement of one visitor parking space per three apartments.

There would be 304 total residential units, including 212 apartments, 34 duplex units, 53 single-family homes and the five cottages. The total is roughly double the 151 units a previous developer proposed for the site in 2014, sparking opposition from neighbors and the formation of Preserve Smithfield, a nonprofit group that had proposed instead turning the then-standing Pierceville homestead into a working colonial farm.

Councilman Randy Pack mentioned Luter IV’s application at the Town Council’s Jan. 3 meeting, noting the application was being reviewed by town staff. Pack, who also serves on the Planning Commission as the council’s liaison, had pledged in 2022 that he would recuse himself from any vote on the development, noting he and his brother, Brian, have an interest in running a restaurant in the proposed market building. The Pack brothers co-own and operate the Smithfield Station restaurant, hotel and marina, a similar establishment in Surry County named the Surry Seafood Co., and are in the process of developing a third named 37 North at Fort Monroe in the city of Hampton.

There’s a window of at least 30 days for Isle of Wight County and state agencies to review the Luters’ proposal, meaning “it may be a month if not more” before the rezoning application is presented to the Planning Commission, said Smithfield Town Manager Michael Stallings.

The Planning Commission will then issue a favorable or unfavorable recommendation to the Town Council, which has the final say.

Preliminary drawings the Luters presented in 2021 showed access to the Grange via Cary Street, Grace Street and Main Street. A Dec. 1, 2022, rendering included with Luter IV’s application shows an additional access road connecting to Route 10. A 155-page traffic impact analysis by Virginia Beach-based McPherson Consulting estimates the Grange, once fully built out, would add over 2,700 vehicle trips per day to Smithfield’s roads, 55%-65% of which would be via the development’s direct access to Route 10. Another 15%-25% would use the Main Street access and an estimated 2%-5% would use the Grace Street or Cary Street connectors. Using the Virginia Department of Transportation’s A-F grading scale for evaluating wait times at intersections, the existing intersection of Grace and Cary streets would maintain an “A” rating through 2030 whether or not the Grange is built. The intersection of Main Street and Route 10 would maintain an overall “C” grade through 2030, also regardless of whether the Grange is built.

In addition to its impact on local roads, the Grange is projected to add 114 students to the Isle of Wight County school system, potentially putting Smithfield Middle School over capacity by three students.

The 2021 proposal had included extra parking for the nearby Christian Outreach Program in the former Isle of Wight County Health Department building at 402 Grace St. The current plans now call for the Schoolhouse Museum to also receive a parking lot, and a shared parking agreement that would allow the Grange to be used as overflow parking for Main Street Baptist Church on Sunday mornings.

The Schoolhouse Museum, a 1932 wing of the Christian Home School that once stood on the Isle of Wight side of the county’s border with Suffolk near the Chuckatuck community, highlights the African American educational experience during the first half of the 20th century in a typical one-room structure of the era. The Grange “will celebrate the historic character of Smithfield by highlighting The Schoolhouse and all it stands for,” states a project narrative included with Luter IV’s application.

The Luters, according to Figura’s report, are requesting that Smithfield and Isle of Wight jointly “purchase and operate the new Smithfield Market,” “provide an economic development incentive for the hotel” and “purchase the development’s infrastructure and utilities through a participation agreement.” The report assumes the Isle of Wight County Economic Development Authority would purchase the market by issuing a 20-year revenue bond.

There “should be sufficient revenue to purchase and operate the Smithfield Market, provide the requested economic development incentives, and retain a portion of the revenue as a return on investment for public use,” the report states, estimating a 2-to-1 benefit-to-cost ratio for the county and a roughly 4-to-1 benefit-to-cost ratio for the town.

The submitted project narrative says the Luter family has been “an active investor and developer of Class-A market rate and affordable multifamily housing” over the past 10 years, and asserts the Grange will “attract people of all ages and socioeconomic backgrounds to enjoy the amenities being proposed.” In 2020, Luter IV had written to the Town Council that his father envisioned “a high-quality development” with multifamily housing “for all income levels.”

“Class A,” in the real estate market, refers to the most expensive homes with high-end finishes and in the most desirable neighborhoods. According to Figura’s latest financial impact analysis, the apartment rental rates would range from $1,475 per month for a one-bedroom unit to $2,100 per month for a three-bedroom “carriage house” apartment – well above the median $995 monthly rent the 2020 Census listed for Smithfield.

Figura’s study estimates the duplex units to sell for $505,000 and the detached homes to sell for $575,000. Average household incomes are projected to be about $81,125 for apartment-dwellers and $109,650 for residents of the single-family homes.

A 255-page Phase I environmental site assessment by Bay Environmental Inc. of Chesapeake states Virginia Department of Environmental Quality records show a 550-gallon, underground diesel tank installed in 1978 at the former Little’s supermarket. The tank was filled with concrete slurry in 2000. It is “likely” that the 40-plus-year-old tank “has leaked,” Bay Environmental’s report states.

According to the report, the soil still contains “low levels of petroleum hydrocarbons” from three underground gasoline tanks and a kerosene tank that existed on the site in the 1960s and 1970s. The gasoline tanks were removed and the kerosine tank was closed in place in 1996, and the property has been “cleaned up to the satisfaction for the Virginia DEQ.” Bay Environmental’s sampling, however, “revealed higher concentrations and more extensive contamination” than the DEQ’s 1996 closure report, according to Bay’s Phase II environmental site assessment.